The night ended with Shrewsbury Town securing their first win in the Leasing.Com Trophy.

Town put three goals past the Young Magpies side to earn their first win in the competition. Jason Cummings, Fejiri Okenabirhie and David Edwards were the three on-form to notch the goals for their team.

Shrewsbury Town’s Leasing.Com fixture with Newcastle United got off to a bright and energetic start, with both sides looking to play progressive football. Within the opening ten minutes, both teams had half-chances near the opposition box but the two teams were unable to nick the go-ahead goal.

Town were the team to break the deadlock with a 23rd minute goal. Shaun Whalley did well to find space on the edge of the box and managed to find Fejiri Okenabirhie. The striker didn’t need a second invitation and slotted the ball low into the corner of the net from outside the Newcastle box.

The home side managed to double the lead on the 32nd minute mark through Jason Cummings. The Town forward managed to make a good contact on the ball from a corner and saw his effort nestle in the corner of the net.

Town were the team in the ascendancy as the game progressed towards the halfway mark. Town’s front-line were creating chances and forcing the young Magpies to defend their box regularly.

It was the Shrews who went into the break with a solid 2-0 lead. Sam Ricketts’ team enjoyed a lot of the ball and created numerous chances in and around the Magpies box.

The second period of play got underway with the two teams looking to get on the ball and make things happen. The Magpies midfield were passing well and asked questions of the Salop back line.

Just before the hour mark the visitors managed to get an effort closer to goal. Despite this, the ball rebounded off the post and bounced away from any danger, to the relief of the Town defence.

The visitors came agonisingly close once again through Victor Hernandez just before the 70th minute. The young forward made good headway towards goal but couldn’t find the final finish to draw a goal back for his side.

Referee Peter Wright made the first booking of the night with less than 20-minutes to go after Kyle Scott committed a foul in the Salop half.

David Edwards managed to get himself on the score sheet with less than ten minutes to go. The midfielder received the ball in a tight area inside the box and managed to turn and power the ball into the back of their net.

The game came to an end with Town securing a convincing 3-0 win against the young Magpies side.

Shrewsbury Town are pleased to confirm the date for their Leasing.Com Trophy group game against Newcastle United U21s.

The game will take place on Tuesday 8th October with a 7:30 pm kick-off at the Montgomery Waters Meadow.

As per last season, for group matches, only the Roland Wycherley East Stand and DM Recruitment North Stand will be open for these games.

If you can't make it to the game you can listen to full match commentary, or watch the game live on IFollow Shrews or download the app here to keep in touch if you are out and about - IFollow App. 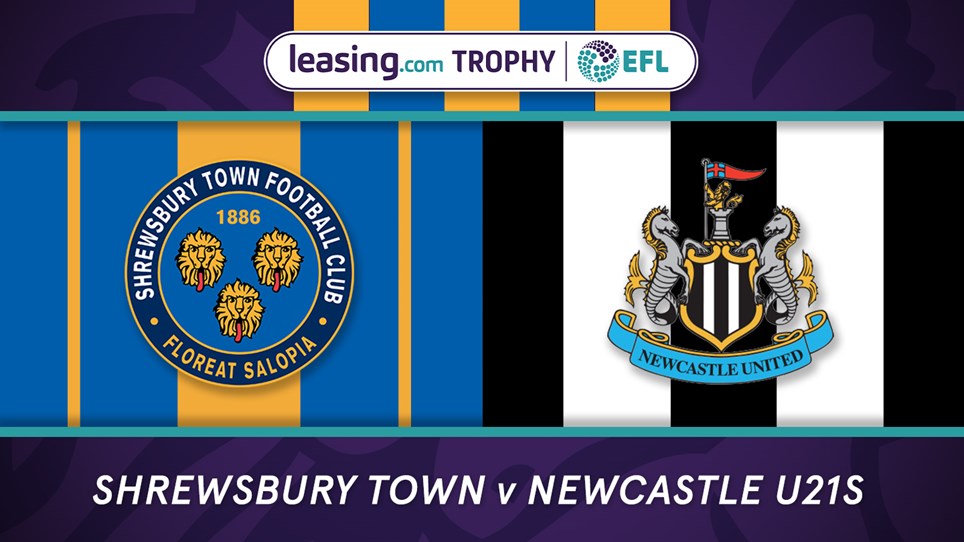