It's almost time for our next instalment of Sky Bet League One with the visit of Fleetwood Town this Saturday. The Cod Army currently sit in fourth place with seventeen points and a game in hand on two of the three teams above them. They've won five of their nine games so far, but fortunately for us, only one of those wins was acquired on the road. Their four away games have seen them lose once, draw once and lose twice with a goal difference of just -1 (8 for, 9 against).

So far, manager Joey Barton's main goalscorer in the league has been Paddy Madden who's scored five times from five starts and four substitute appearances. Josh Morris isn't far behind him with three from nine starts. Fleetwood's current form is pretty good with two wins and two draws from their last five games in all competitions. They're unbeaten in their previous four games and last lost on August 31st against Lincoln City.

Lewie Coyle has the most assists this season with three from nine games in League One. The 21-year-old defender is in his third spell with Fleetwood, on loan from Leeds United where he's been since he was ten.

Their main strength seems to be going forward and outscoring opponents, they're the highest-scoring team in the top six, and only Peterborough and Oxford have scored more in League One. Fleetwood have only failed to score in one League game this season, and that was in their away game when they lost 2-0.

If Fleetwood have a weakness, it would appear to be that they've only kept one clean sheet all season and that was from their 2-0 win at home to Accrington. They've conceded more goals than any other team in the top six which leaves them with a +4 goal difference, five more than ours. Their highest scoring game was their last away game, which was away at Southend. Both teams scored three times in one of the most exciting draws you're likely to see in this division.

Referee
Kevin Johnson from Somerset. Games this season: 9. Yellow cards: 24. Red cards: 4.
Mr Johnson has been a League Referee since the 2015/15 season. He officiated at one Town game that season, a 1-0 away defeat which saw Andy Mangan sent off in the closing minutes, Johnson's first red card in the Football League.

Squad News
Sam Ricketts has mentioned a few niggles from the Rotherham game but stopped short of saying who, so there are no new names to add to the injury list.
Joey Barton may name an unchanged team with no new injuries to report.

Pre-Match Press
Joey Barton was as complimentary about us as opposition managers usually are and went on to warn against fielding a five-man defence for fear of upsetting the crowd.

Sam Ricketts emphasized the importance of keeping the momentum going, particularly at home where we're unbeaten.

Summary
This is going to be an interesting game which will need full concentration to have any chance of a result. Fleetwood have plenty of threats, and we need to be on top of everything, but we have our own threats for Fleetwood to worry about too. We're definitely good enough to win this weekend, but I mean no disrespect to the Cod Army when I say that. We've all watched the squad being put together, we know what they're capable of, and we've seen the early signs that this could be a good season. We can beat anyone on our day, and I hope this Saturday we can make sure that it is our day.

Town fall to defeat at home.

A frustrating afternoon at Montgomery Waters Meadow this afternoon. Town had many chances but weren’t fortunate enough to find the back of the net. With many decisions not going their way, Town came away without a point after a three-nil loss against Fleetwood Town.

Sam Ricketts made one change from his starting 11 last week against Rotherham. Jason Cummings starts over Shaun Whalley. Both Aaron Pierre and Louis Thompson return to today’s bench.

With one goal putting the difference between the teams, Town looked strong and created many chances. A forced substitute had to be made just before the half-time whistle as Ethan Ebanks-Landell came off for Aaron Pierre after going down injured.

Within the first minute, Sean Goss almost scored from the half-way line. After a long ball was played to Fleetwood’s backline, Jason Cummings managed to intercept the ball and lay-off Goss. Goss curled one that looked to be curling towards the goal, but Alex Cairns did well to recover and put the ball out for a Town corner. Goss stepped up to cross in the corner and Ebanks-Landell does well to get on the end of it, but the ball was just over Cairns’ bar.

Donald Love created a good chance after he was fouled by Danny Andrew. Goss crossed the ball in, deep from the right-hand side and Omar Beckles and Callum Lang were both running in to get on the end of it but was centimetres away from touching the ball into the net.

Town created many good chances but weren’t fortunate enough to finish them. Another good chance came from Josh Laurent who found Love down the right, Love crossed in the ball in an attempt to find Jason Cummings, however, Cummings just couldn’t quite make it.

Another quality free-kick from Goss after Jimmy Dunne pushed Lang in his back winning Town a free-kick in a dangerous area. Goss crossed the ball in as Beckles was diving in but once again Beckles was just short of connecting with Goss’ ball.

Ryan Giles had a great chance after Lang produced a great run down the right wing and onto the by-line, Lang pulled it back to find Giles on the edge of the box and he hit it first time, but the ball went well over Cairns’ bar.

Cummings had a great chance after he was on the receiving end of a Town long ball, Jason attempted to chip Cairns, but he managed to get his body in the way and deny Cummings a goal. The ball deflected out for a Town corner.

One of Fleetwood’s first chance of the game was a corner after Lewie Coyle went on a run from the back and attempted a cross but was denied by Ro-Shaun Williams. Captain Paul Coutts stepped up and found Jimmy Dunne at the back post. His header fired onto O’Leary’s bar and took a deflection off Lang. 1-0 Fleetwood.

Just shy of the half-time whistle Cummings had a cracking effort at goal after he saw Cairns off his line and attempted to shoot from 35-yards-out. Cummings saw his effort just floating over Cairns’ bar.

Ethan Ebanks-Landell was replaced by Aaron Pierre in the first half after seeming to pick up a hamstring injury.

Town got the second half underway looking full of energy and eager to get on the scoresheet. Captain fantastic Ollie Norburn being the main man in the middle, after creating chances and produced some great balls with switching play and keeping possession.

However, Town didn’t get their dream start of their second half after Josh Morris doubled Fleetwood’s lead. A scramble in the box and Morris was the man to put the ball into the back of O’Leary’s net.

Aaron Pierre produced a class challenge on Wes Burns after having to track back and deny Fleetwood from becoming a threat. The second half showed that Fleetwood became the team on top after they started to produce some good football.

Fleetwood had a good chance after a well-worked cross came flying in to find Wes Burns. Burns took it first time from inside the six-yard box and managed to fire it well over O’Leary’s goal.

With ten minutes to go, Fleetwood got their third of the game. A long ball from deep found Wes Burns down the right after Pierre struggled to meet the long ball. Burns crossed the ball into substitute Paddy Madden. Madden controlled the ball with his chest setting himself up for the volley. Madden smashed home the volley into O’Leary’s net after O’Leary’s hand just wasn’t strong enough to stop the ball from flying in.

Aaron Pierre went on a fantastic run from his backline deep into Fleetwood’s half. Pierre found Whalley down the left wing and Whalley hit an effort low that was saved at Cairn’s left post.

Into added time, Laurent had a great curling effort, but it took a deflection on the way through and was out for a Town corner. Goss’ corner found Pierre’s head but was headed over for a goal kick.

Deep into added time, Fleetwood’s caretaker manager, Joey Barton is shown a yellow card after an altercation on the touchline.

A frustrating and unlucky afternoon on home soil. Town look to put things right next week as they travel to Tranmere Rovers.

The draw of the Postcode Ticket Giveaway has taken place and the winning postcode is SY3 0HX.

Close to 500 tickets were given away last season with people getting the chance to take in a Town home game for free.
If you are in SY3 0HX then keep an eye on your letterbox for your free ticket vouchers. 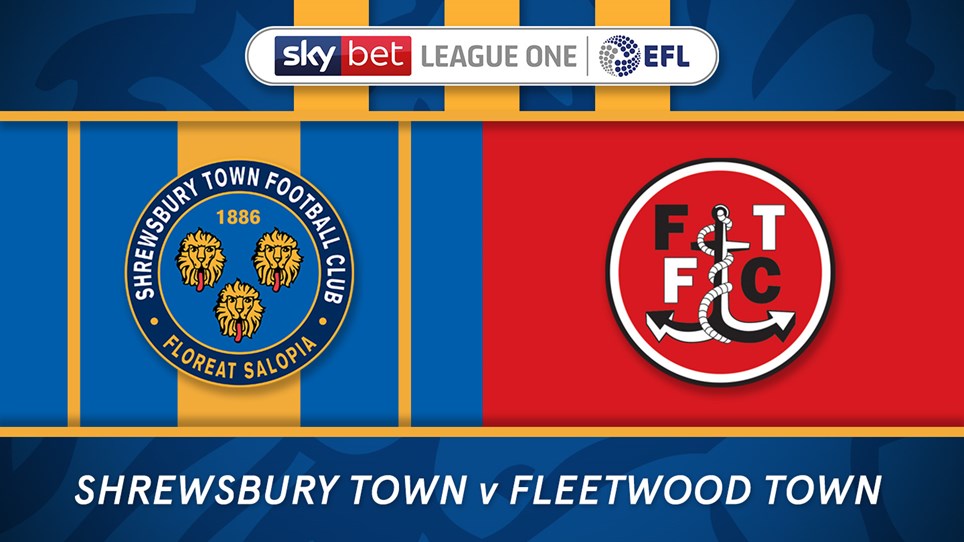