Following on from the weekend's draw at Wimbledon, Town welcome Southend United for our first home game in nearly a month. Southend haven't had the start to the season that they would have wanted and were without a point up until last weekend. This prompted the exit of manager Kevin Bond, leaving Gary Waddock as caretaker manager. With the Shrimpers drawing 3-3 at home on Saturday, Waddock should be pleased with his first result, it might only be a point but the slide has been arrested and there's now an opportunity to quickly consolidate. Standing between Southend and that consolidation is a Shrewsbury Town team that is the only team yet to concede at home in the entire Football League. Admittedly that only amounts to three clean sheets in a row but to be the only team in 72 to achieve it, still feels a decent achievement.

Town will be the favourite to win tonight but a result for the Shrimpers is far from impossible and three points could propel them from 22nd place to 21st. A win for Town and we could find ourselves in the top ten going into Saturday's game at Rotherham United.

Last season we beat Southend 2-0 at home and away, our third and fourth wins in a row against the Shrimpers who last beat us in 2016 at Montgomery Waters Meadow. In all, we've played each other 65 times in the League with Southend winning 27 and town winning 23 times.

Referee
James Adcock from Nottinghamshire. Adcock is an experienced football league referee and has been since 2010. Qualified in 2000 aged 16, James followed in his father's footsteps, who also officiated in the EFL. This is James' 6th game this season and so far he's handed out 26 yellow and 2 red cards.

Squad News
Dave Edwards has joined Fejiri Okenabirhie in the treatment room after his recent ankle injury became aggravated.
Southend will be without midfielder Mark Milligan and defender Nathan Ralph.

Pre-match Press
Gary Waddock has stressed the importance of winning games and has talked about rotating the squad to keep players fresh.
Sam Ricketts paid compliments to Southend after their first point of the season, saying that they played with newfound freedom.

Summary
We need to be winning our home games but this one is a bit of a banana skin for Town to sidestep. After a difficult start to the season, Southend are feeling the benefits of change and will be trying to build upon that. Obviously, We need to stop them from and after such a long time without a home game, it would be nice to see us get an early goal to pour cold water on them. That may not come from new signing Jason Cummings because he's likely to start on the bench again but he's a hell of an impact sub if his debut is anything to go by!

Goals from Beckles, Cummings, Norburn and Lang give Town the 3 points in end to end game

Sam Ricketts made two changes from the side that picked up a point on the road at AFC Wimbledon, in came Jason Cummings for his first Town start and Omar Beckles returns while Aaron Pierre drops down the bench.

Town had a chance right from the start when Goss played a ball wide for Giles, the defender cut it out but Giles nicked the ball and then drove in on goal, he shot but it was deflected for a corner.

Town were looking sharp upfront and were moving the ball around quickly to create space and chances. Goss was pulling the strings as normal and he threaded a lovely ball to find Norburn on the edge of the box, he tried a deft flick to put Lang in on goal but a last-minute Southend foot just nicked the ball away.

There was a decent opening for Cummings on 14 minutes after patient build-up play from Town, Goss threaded a ball to find Cummings on the edge of the box, he took a touch, turned and fired in a low shot that Oxley managed to get down to block.

Town’s pressure paid off in the 18th minute when Omar Beckles got his first goal of the season, it came from good work from Callum Lang who won the ball back, it came to Ethan Ebanks-Landell who fired a low ball across goal and there was Beckles to turn the ball home from close range.

The chances were coming from Town who were putting in a really patient display, the ball was played back to the centre-backs and play was building from there. A ball back across the defence came to Ebanks-Landell, he clipped a lovely ball into the run of Norburn, he stretched a foot out o take the ball down but a defender came across to clear.

The chances were still dropping to Town and the whole squad seemed to be trying to get on the score sheet, the ball found Giles out on the left, he came infield and fired in a lovely low shot that beat the dive of Oxley but the post was there to deny Town.

It was 2-0 to Town on 26 minutes and it was a second goal in two games for Jason Cummings, good build-up play from Town found Cummings with the ball on the edge of the box, he curled in a lovely shot that hit the inside of the post and went in.

Southend were still pushing and on 28 minutes they grabbed a goal back, they built down he right and a ball crossed to the back post found McLaughlin rise above Love and head the ball back across goal above the dive of O’Leary and into the back of the net.

The first booking of the game went to Town, after a misplaced pass gave the ball back to Southend they looked to break quickly, a ball over the defence was meant for Cox but a tug on his shirt from Goss saw the Town pick-up a yellow card.

It was an open first 10 minutes with both sides looking to attack and create chances. Town were digging in deep at the back to contain a number of good looking attacks from the visitors, while at the other end Lang and Cummings were causing a lot of problems for the opposition.

Sam Ricketts made his first change of the evening on 55 minutes with Shaun Whalley coming on to replace Jason Cummings, who had put in a performance of non-stop running and effort throughout the game.

Town had a good chance from a Sean Goss free-kick, he got it up and over the wall but Oxley was equal to it with a great diving save, Lang was quick to follow up and fired in a low shot but again Oxley was there to deny Town.

Town grabbed a lovely third goal on 60 minutes, it came after Shaun Whalley picked the ball up just inside the Southend half, he drove forward and kept going, riding challenges and tackles and burst into the box, he then cut it back to Norburn on the edge of the box and he hit a lovely low shot that beat Oxley, hit the inside of the post and in to the net to make it 3-1.

The chances were falling to Town and when a free-kick was curled into the box Beckles got in front of the defence, he looked to get the header in but Oxley was out big and strong and did enough to take the ball off Omar.

On 70 minutes Sam Ricketts made his next change, bringing on Dave Edwards on to replace Ollie Norburn who left the pitch to a standing ovation.

Southend grabbed a second goal back after a great counter-attack on 76 minutes, they broke with pace downfield and took the game to Town, the home side looked to have enough to deal with it but a ball pulled back to Humphrys on the edge of the box saw him cut a low shot past O’Leary to make it 3-2.

Town grabbed a fourth goal in what was a topsy turvey game, it came from a slip from Ralph who was put under pressure from Laurent, he nicked the ball away and then played it into the box to set-up up Lang and he made no mistakes stroking the ball past Oxley to make it 4-2.

Sam Ricketts made his final change of the evening bringing on Daniel Lang to replace Callum Lang, who left the field to a standing ovation.

Southend grabbed another goal back just as the board was being held up to show extra time, it came from Simon Cox who fired in a good effort from 25 yards out that beat O’Leary to make it 4-3 with minutes remaining

The draw of the Postcode Ticket Giveaway has taken place and the winning postcode is SY1 4PG.

Close to 500 tickets were given away last season with people getting the chance to take in a Town home game for free.
If you are in SY1 4PG then keep an eye on your letterbox for your free ticket vouchers. 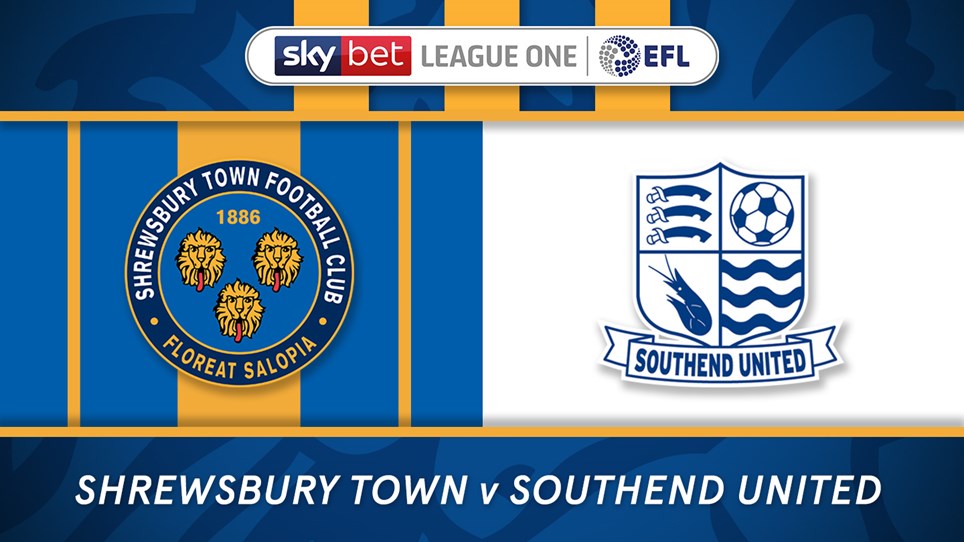