Take a look at the latest facts and stats ahead of our Sky Bet League One clash with Ipswich Town.

Ipswich Town have enjoyed a solid start to the 2020/21 campaign as they chase promotion back to the Sky Bet Championship. So far this season, the Tractor Boys have played 11 league games – winning seven, drawing one and losing only three as they currently sit third in the table.

With a goal difference of +8, Paul Lambert’s men have proved to be a tough test for any Sky Bet League One defence – trailing only to Peterborough United, Hull City and Portsmouth who have +10, +9, and +9 goal differences respectably. In their last five games, the Blues have won two and lost three.

Nickname: Blues, The Tractor Boys, The Pride Of Anglia

A former Premier League manager, Lambert joined the Tractor Boys on October 27 2018 – making him the first ever manager to manage both Ipwich and riavls Norwich City.

During his time with Norwich, Lambert guided the club to successive promotions from Sky Bet League One to the Premier League but ended his three-year stay at Carrow Roadto join West Midlands outfit Aston Villa. His other stints as manager were spent with Livingston, Wycombe Wanderers, Colchester United, Blackburn Rovers, Wolverhampton Wanderers and Stoke City.

As a player, the midfielder enjoyed a stellar career having won the UEFA Champions League in the 1996–97 season with Borussia Dortmund. The 52-year-old also enjoyed a trophy-laden eight years with Scottish Premier League side Celtic. 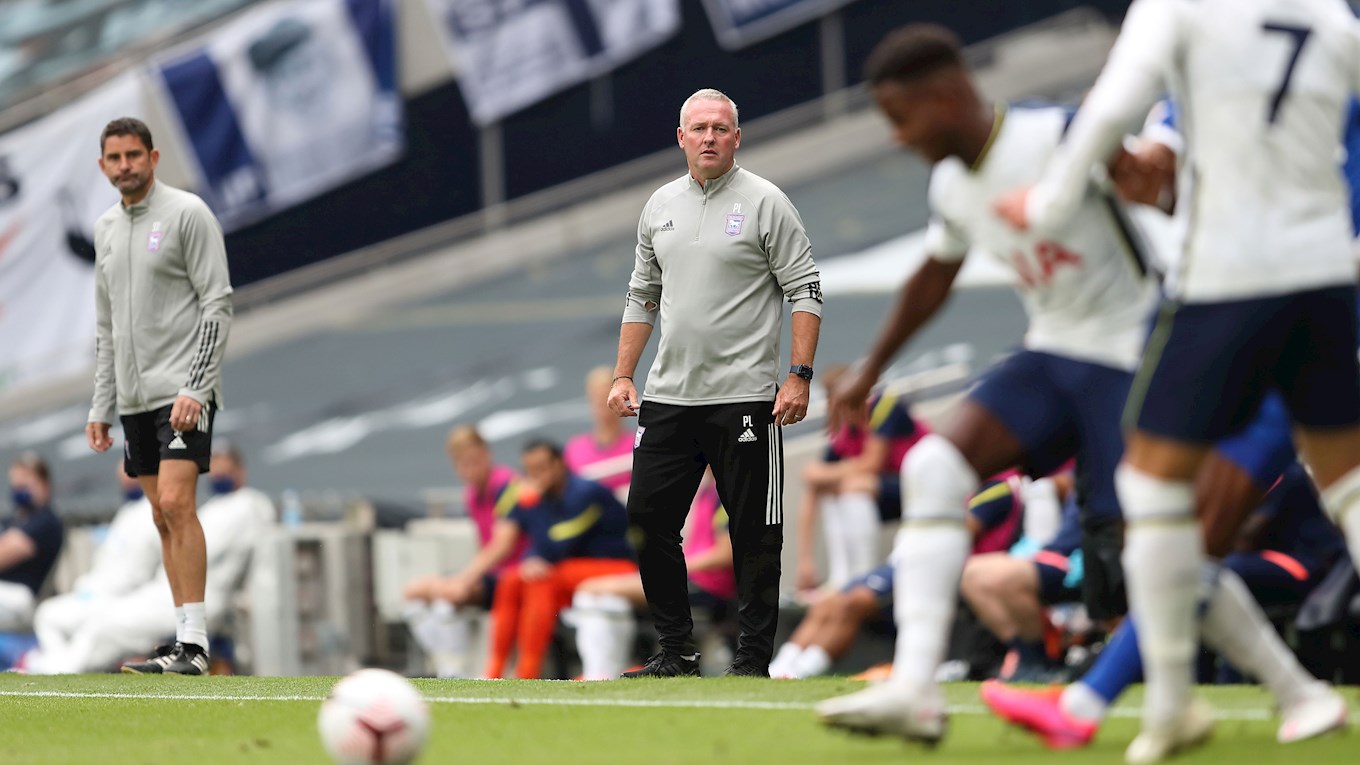 Tomas joined Ipswich in May 2019 following a two-and-a-half-year spell with Gillingham. He signed for Blues having made 52 appearances in the 2018/19 season, keeping 15 clean sheets.

The shot-stopper has represented Czech Republic at U16, U17 and U18 level. He made his debut for the club on 3 August 2019, keeping a clean sheet in a 1–0 away win over Burton Albion at the Pirelli Stadium.

The 28-year-old began his career with Everton but didn’t taste first-team football until moves to Accrington Stanley and Macclesfield Town on successive loan deals. The DR Congo international has also spent time with Southport, Grimsby Town and Hartlepool United and is now a regular in the Ipswich back line. 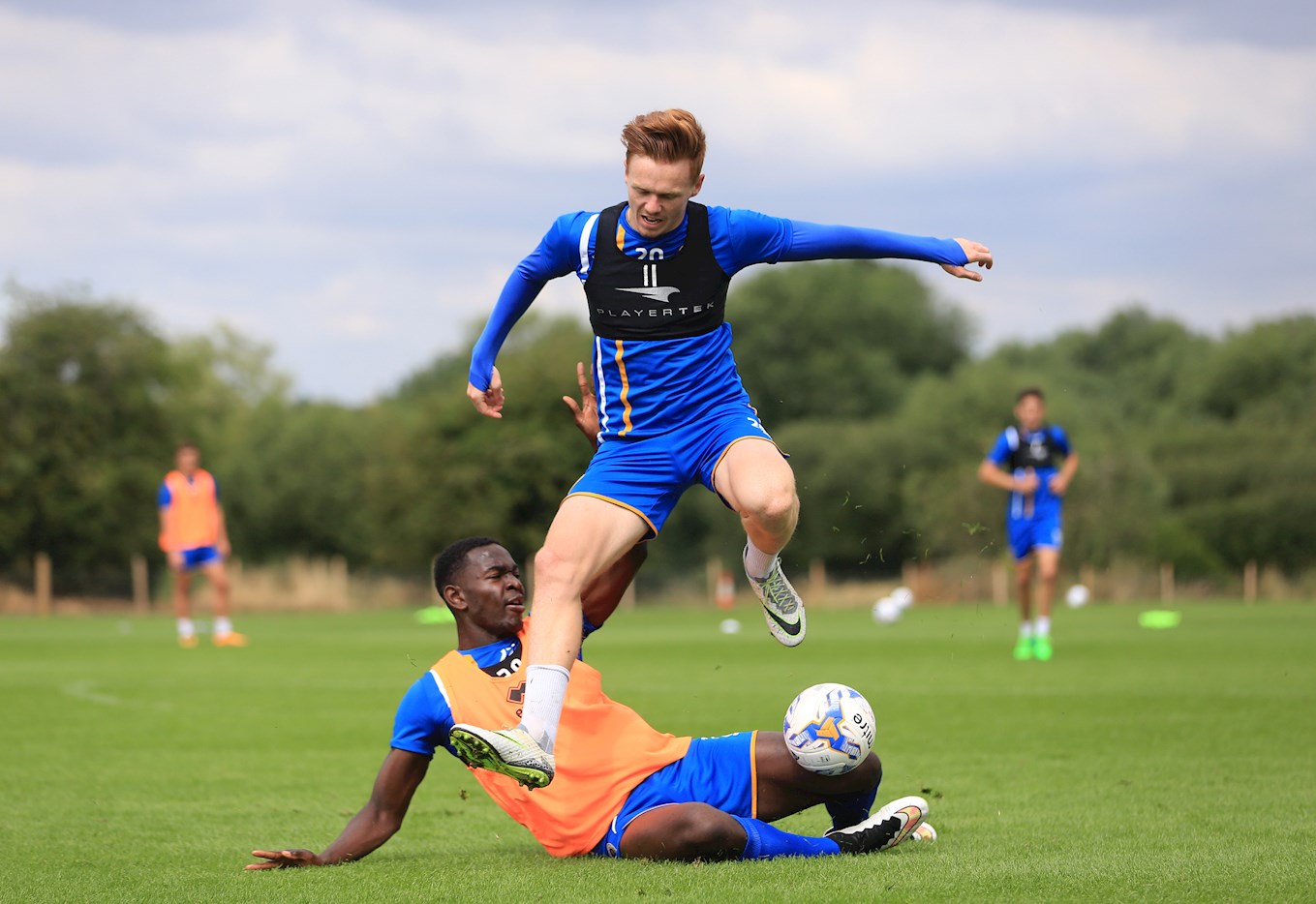 The central midfielder started his career in non-league with Stockport County before spending time with Lincoln City, Wrexham, Grimsby Town and Chesterfield. The 28-year-old, who boasts impressive vision, joined Salop in 2017 but only spent one year in Shropshire.

Edwards has had enjoyed a bright start to the season having netted five goals and assisted three times for his team so far in the league. The 27-year-old winger started his career with Swansea City but enjoyed first-team football during loan spells with St Johnstone and Crawley Town.

Before joining the Tractor Boys in 2018, the Welshman was a key part of Peterborough United's front line. Edwards won Goal of the Season for the Posh in 2016/17. The forward has appeared for the Wales under-21 side on six occasions and two for the under-19 team.

Read Matt Millar's thoughts ahead of the game...

Town fall victim to a 2-1 comeback against Ipswich Town.

Town's afternoon in Suffolk ended in disappointment as Salop couldn't secure any points at Portman Road.

Despite a bright start from Town taking the lead within the opening moments of the game, Sam Ricketts' team's hard work was undone with a 90+6 minute winner from the Tractor Boys.

Just two minutes into the game, Town were awarded a penalty as Shaun Whalley was pulled down after driving in the opposition box dangerously. Ollie Norburn stepped up to take the spot-kick and smashed the ball down the middle to give Salop the lead.

Town were denied another obvious penalty with just under 17 minutes on the clock. Marc Pugh dribbled past his man in the box and was brought down by a trailing leg but Tim Robinson didn’t award the penalty kick.

Heroic defending from Ethan Ebanks-Landell kept Salop in the lead towards the latter stages of the half. The Tractor Boys did well to find space in the box but Town’s centre-back launched his body towards the ball two times to keep each effort away from goal.

Harry Burgoyne made a pivotal contribution to his team with over an hour gone. The keeper spread himself well across the goal to prevent Alan Judge from scoring a tap-in at the far post after some good work from the Ipswich wide men.

Marc Pugh stung the palms of Tomas Holy in the 67th minute but couldn’t beat the Blues’ keeper from range. Norburn played Pugh through towards goal but his long-distance shot was well saved.

Town’s lead was taken away with 15 minutes left in the tie. Ebanks-Landell tried to block a cross but saw his effort slice into the back of the Salop net.

Things took a turn for the worst with seconds left in the tie. After sustained pressure, the home side managed to find another goal with no time left in the fixture to secure the win against the run of play.

Ollie Norburn was shown a yellow card in the 33rd minute for a late foul on Teddy Bishop.

Jack Lankester was the next player booked for a foul on Shilow Tracey as the winger looked to break on the counter-attack in the 62nd minute.

Match passes are now available to purchase for Town's away Sky Bet League One clash with Ipswich Town.

iFollow passes are now available for supporters who are wanting to watch Town's Sky Bet League One fixture against Ipswich Town! 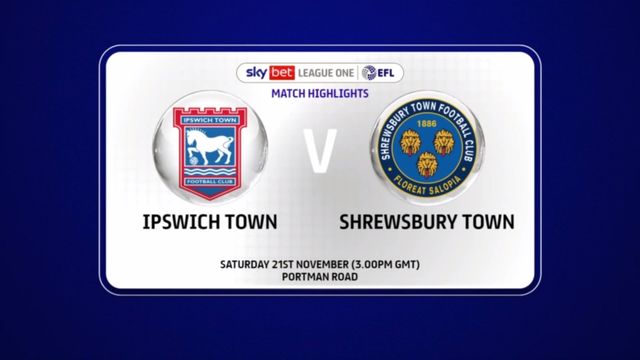 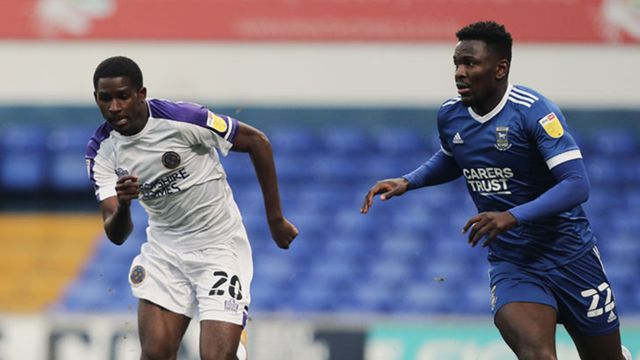