Shrewsbury Town Football Club travel to Fleetwood Town this evening for the Shrews’ latest Sky Bet League One fixture. Town will be looking for a return to winning ways against Joey Barton’s Cod Army after a narrow defeat against Rochdale.

Fleetwood have started the season with a mixed bag of results. Barton’s team currently sits 12th in the Sky Bet League One table having won three games, drawn one and lost 4. They also have a goal difference of +2.

Former England and Manchester City midfielder Joey Barton is in his first stint in football management. The 38-year-old first took control at Highbury Stadium in 2018 and has since guided his team to an unsuccessful play-off final appearance.

Barton currently boasts a 38.9 win percentage as a manager and is widely admired by the Fleetwood fan base.

As a player, Barton enjoyed a successful career – playing for Manchester City, Newcastle United, Queens Park Rangers, Marseille, Burnley and Rangers. During his 15-year playing career, he has won the Sky Bet Championship on two occasions and one Sky Bet play-off final medal.

Leutwiler – who has represented the Canadian national team three times – joined the Cod Army after making almost 100 appearances at League One level. The highly-experienced goalkeeper has previously represented Shrewsbury Town and Blackburn Rovers.

The goalkeeper started his career at Swiss side Basel and gained valuable experience at Yverdon-Sport and Wohlen during that time. He then moved to England to Middlesbrough, before joining Shrewsbury Town in 2014 – where he would play over 140 times over three years – earning promotion to League One in that time.

Charlie Mulgrew joined the Cod Army in the 2020 summer transfer window on loan from Blackburn Rovers. The highly experienced 34-year-old has won a number of SPL titles with Celtic as well as promotion from Sky Bet League One with Blackburn.

Mulgrew's career has included spells with Celtic, Wolverhampton Wanderers and Aberdeen, as well as short loans at Dundee United and Southend United in the early part of his career. The Glaswegian has also represented Scotland on 44 occasions - scoring 3 times.

Camps made 240 appearances for the Dale during his seven years at the club scoring 30 goals along the way. The midfielder signed for the Cod Army in August 2020, and scored on his competitive debut for the club, netting the first of three goals in a 3-1 win over Carlisle United in the EFL Trophy.

Welsh-born striker Ched Evans began his professional career with Manchester City in 2007 and spent two years with the Cityzens. The forward has enjoyed a lengthy career and has spent time with Norwich City, Sheffield United and Chesterfield - as well as representing Wales on 13 occasions.

The 31-year-old joined the Cod Army in July 2018 and signed a long-term loan deal at Highbury Stadium. However, Evans made the move permanent a year later - joining the club for an undisclosed fee.

A disappointing evening for Salop came to an end with Fleetwood Town securing a 1-0 win.

Ched Evans was the man on hand to notch for the Cod Army as their first-half goal ensured all three points remained in Fleetwood.

An energetic and competitive start from both teams saw action in both halves of the pitch within the first 15 minutes. The Shrews looked strong on the left flank whereas the home side continually threatened on the break.

It was the home side who managed to find the breakthrough in the first-half. Ched Evans latched onto a loose ball and neatly curled his effort into the Town net via the inside of the post in the 26th minute.

Harry Burgoyne made a solid save for his team with just over 30 minutes gone by. Town’s number one converged quickly on Paddy Madden’s shot to keep the score 1-0.

The home side took their advantage into the break despite the general lack of chances in the tie.

Early in the second period, Burgoyne was called into action again. Callum Camps had a close-range shot for his team but Town’s shot-stopper did well to get a limb on the ball to clear from danger.

Marlon Fossey made an important goal-line clearance for his team with just over an hour on the clock. Fossey jumped well to meet a shot, which was heading for the top corner of the net.

Brad Walker came inches away from giving Town a goal to pull level with under 20 minutes to go. The midfielder’s shot unfortunately deflected just wide of the post to the delight of the Cod Army keeper.

Despite Salop pushing men forward in the final moments, the Shrews were unable to unlock the door as the game finish 1-0 to Joey Barton’s team.

Ched Evans was shown the first yellow card of the game for a late challenge on Ethan Ebanks-Landell in the 35th minute.

Charlie Daniels was shown a yellow card for a challenge on Ched Evans in the middle of the park.

iFollow passes are now available for supporters who are wanting to watch Town's Sky Bet League One game against Fleetwood. 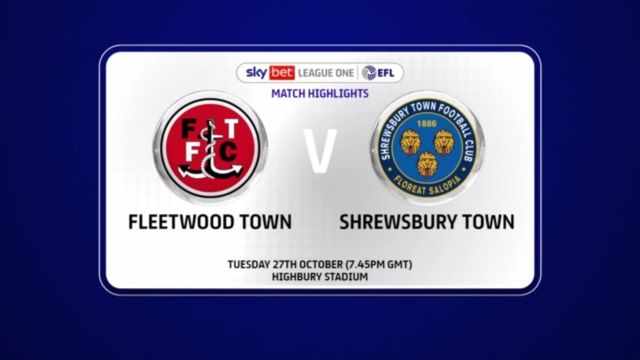 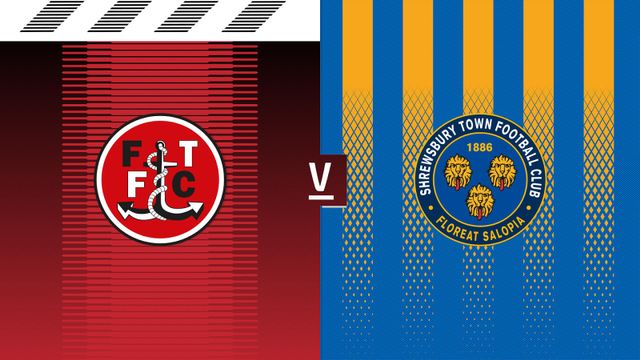 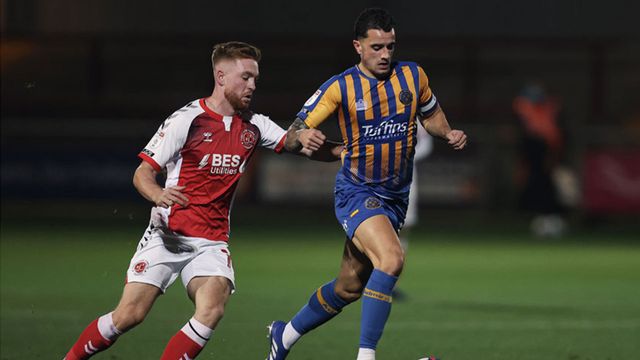