Take a look at Town's pre-match preview for Gillingham.

This weekend we welcome Gillingham to Montgomery Waters Meadow for our second Sky Bet League One game of the season. The Gills started their season with two cup games, beating Southend 1-0 in the Carabao Cup and then Crawley Town 2-1 in the EFL Trophy. They followed that results with another couple of home games but lost 0-2 to Hull City in their first league action of the season. However, they did beat Coventry in the League Cup on penalties after a 1-1 draw.

Gillingham's first away action saw them beat Wigan 3-2 for their first league win of the league season but followed that up with a 1-0 away defeat to Stoke City in the Carabao Cup. Last weekend, the Gills entertained Blackpool -  although the entertainment value in losing 2-0 may have been wasted on the Seasiders.

Five goals in three league games or nine goals from seven games when you factor in the cup goals. That's not a bad return when you think that they've played two Championship teams and two of the newly relegated teams. They've conceded seven goals from those seven games giving them a +2 goal difference in all games and a +1 difference in the league. Gillingham have failed to score in just two games, once against Hull City in L1 and once against Stoke City in the League Cup.

Town have a number of injuries with Matija Sarkic and Ryan Sears ruled out for 2-3 months and others nursing less serious injuries.

By contrast, Steve Evans has plenty of options including new loan defender, Declan Drysdale who arrived from Coventry City in the week.

We face another team in good form this weekend, managed by an old foe in the form of Steve Evans. He's become a sort of pantomime villain for some Town fans over the years but the reality is that he's a passionate manager who has the ability to make teams more than just the sum of their parts. So we'll face a motivated Gillingham and we'll have to work very hard to stop them.

Our own performances have been very encouraging so far, we've faced some good teams and have given a good account of ourselves. We haven't registered a league win so far but I have the feeling that this is a team that is coming together nicely. A win is surely just around the corner, let's hope it's this weekend!

Shrewsbury Town earn a point at home against Gillingham.

Ryan Barnett made his first league start for the Shrews having impressed from the bench in recent weeks. It was also the first start in Blue and Amber for Leon Clarke who made his debut last week away at Plymouth.

With the wind and rain whistling through the Montgomery Waters Meadow, it was Shrewsbury who started the better of the two - registering their first shot on goal inside five minutes after Shaun Whalley attempted an ambitious overhead kick.

The away side eventually got a foothold in the game. A small mix up at the back freed Vadaine Oliver whose shot was fired wide. This was a costly miss as moments later Brad Walker put the home side in front with an unmarked header from a Shaun Whalley.

Forer Wolves man Jordan Graham was the most threatening player for the Gills down the left-hand side. He was more than matched by Whalley down the Town right, both men putting testing deliveries into the penalty area.

With half an hour gone, it was still Shrewsbury looking the most threatening, this time Vela looked to add to the lead after taking the ball down on his chest and firing on the half volley forcing a diving save from keeper Jack Bonham in the Gillingham goal.

Town were dealt an injury blow just before the half with danger man Shaun Whalley forced off, manager Sam Ricketts turned to Josh Daniels to continue the threat down the right.

Just like the first-half, Salop looked at their most dangerous from set plays once again a corner found the head of a Shrew’s player this time Aaron Pierre whose header was cleared of the line.

The Gills almost levelled the score with 55 minutes gone, second half substitute Declan Drsydale looked to have found the net with thunderous strike only to be denied by his own man on the goal line who prevented the equaliser with his face.

Despite their lead it was the away side who appeared to be growing in confidence as they searched for the equaliser, but some solid defending Pierre and Ethan Ebanks-Landell kept Shrewsbury ahead with 20 to play.

Graham found his name in the book for the away side after a miss-timed sliding challenged hacked down Pierre, many felt the challenge was worthy of a red as it appeared the Gillingham man did have his studs raised.

Ricketts waited till the 80th minute before making his second substitute, Scott high was introduced replacing Barnett with Town looking to regain some control in the middle of the park.

The equaliser did eventually come deep into added time after a lengthy injury stoppage, it was Jordan Graham who made the telling contribution heading in from close range to break Shrews hearts having led for a long time in the game.

A point proved a fair result in the end as Shrewsbury continue their search for a first league win.

Match passes are available to purchase for Town's home clash with Gillingham.

iFollow passes are now available for supporters who are wanting to watch Town's Sky Bet League One game against Gillingham. 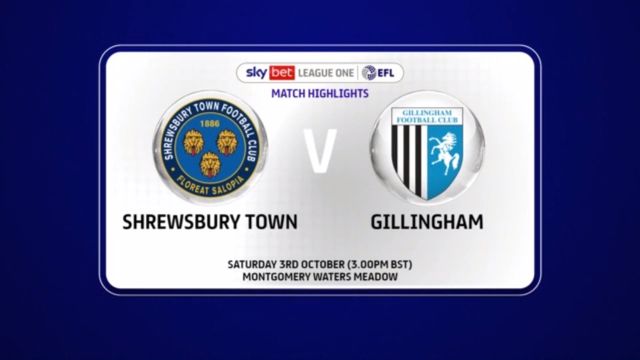 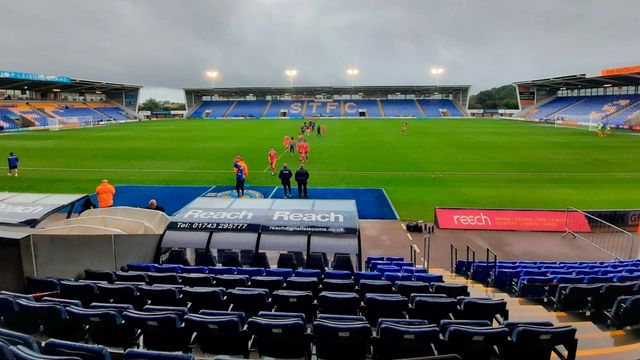