Take a look at Town's next opposition - Rochdale.

Shrewsbury Town play their second home game in a row this weekend with the visit of Rochdale in Skybet League One. Like many teams this season, Dale started with two cup games, beating Huddersfield 1-0 away in the Carabao League Cup and Morecambe 2-1 away in the EFL Trophy.

Their first league game of the season was their third away game in a row but they didn't manage to make it a hat-trick of away wins, losing 3-1 to Swinton Town. Their first home game of the season came in the second round of the Carabao League Cup against Sheffield Wednesday, who won 2-0. It was Dale's first game without scoring this season and a further three followed in relatively quick succession.

The visit of Portsmouth ended in a 0-0 draw, a trip to Ipswich resulted in a 2-0 win for the home team and their home game against Manchester United u21's finished goalless followed by a penalty shoot-out defeat.

Their last four games have seen an improvement in results with two wins and two draws, all in Skybet League One. On October 3rd, Rochdale broke their goal drought with a 2-0 home win against Fleetwood in Skybet League One. A close 2-1 league defeat at Accrington was followed by a slightly less close 3-0 home defeat to Hull City and last week, Dale beat Burton 1-0.

Two from league games and two from cup games.

So far, Rochdale haven't been given any red cards in League One and have only received eight yellow cards, the second lowest in the division.

In League One, Dale have scored five goals, two at home and three away from home. Of their three away goals, all were scored in the second half with two scored in the first fifteen minutes and the third in the last fifteen.

They've conceded eleven goals in the league, four at home and seven away. Of those seven, three were conceded in the first half and four in the second.

Scott Goldbourne is unlikely to be available after Tuesday's injury against Bristol Rovers.

Rochdale are in a similar position to us in the league with seven points to our six but we have played one less game. From the available footage, Rochdale look strong going forward and comfortable in possession when at their best. They look able to take advantage of free-kicks and corners with several players capable of a decent delivery. They're also capable of conceding goals, particularly away from home so if we can keep working hard for opportunities things could go our way.

Shrewsbury Town lose out to Rochdale by one goal despite Aaron Pierre netting in the first-half for Salop.

Dan Udoh found himself operating down the left as Salop started the brighter of the two sides with new man Charlie Daniels involved early as they looked to switch play out to him on the left-hand side.

The visitors were quick to stem the flow and grew into the game creating two chances on goal inside ten minutes, a header that flashed over the bar from Jack Beesley, followed by a shot that flashed across the face of the goal from Alex Newby.

It was Jason Cummings who had Salop’s first real sight of goal after a long throw bounced around in the area before falling to the wide man who couldn’t control the half volley and his effort was well over.

Leon Clarke nearly found the net when his header, which looked destined to find the bottom corner, narrowly fell on the opposite side of the post, it was Daniels with another smart delivery from a corner that set up the chance.

Despite not threatening since their early flashes it was the away side who took the lead, Dale broke down the right and Oliver Rathbone, who made a well-timed run from deep, was able to head home a quality ball in as he got just in front of Marlon Fossey at the back post.

The game began to get stretched as The Shrews threw more men forward in search of an equaliser and it was Clarke again who had a header on goal this time hitting the target, but It was a comfortable save for Gavin Bazuna in the Dale goal.

Rochdale had a chance to make it two-nil when a floated corner found the head of the unmarked skipper Eoghan O’Connell who didn’t capitalise on a prime opportunity to double his sides lead.

Town, unfortunately, couldn’t get a foothold back on the game as they pressed higher up the field and eventually Dale had Alex Newby free in behind, the midfielder made no mistake one on one with Harry Burgoyne rolling the ball home for two-nil, despite some claims for offside.

With two minutes remaining in the half Aaron Pierre thundered a header off the post again from a corner, the rebound just didn’t fall for anyone in a blue and amber shirt and Rochdale were able to clear their lines.

It looked like the home side were going into the break with a two-goal deficit, but their persistent pressure forced another corner, Daniels once again showed his quality on his debut as it was his delivery that was nodded home by Pierre who was denied by the post just seconds earlier. Two one at the break.

Shrewsbury came out in the second half once again with the majority of possession, there was a noticeable zip to their play and it was clear manager Sam Ricketts had fired them up during the interval.

Scott High had the first effort of the second period when the ball fell to him on the edge of the area, the on-loan youngster volleyed his powerful strike narrowly over the Rochdale goal.

With 65 minutes gone in the game town still had the edge in terms of the run of play but the visitors were standing strong and both sides struggled to create any clear-cut chances.

Ryan Barnett was the first change made by Ricketts replacing Scott High, the sub looked to make an instant impact as his link-up play and lofted cross to the back post won Town another corner resulting in an effort on target as Pierre again rose highest.

With 15 minutes left to play Dale had a hopeful ball lofted into the area that saw Fossey and Beesley go up for a challenge the coming together resulted in an injury stoppage, Beesley was eventually replaced but Fossey was able to carry on.

It was Fossey then involved at the other end as the right-back had his header heroically saved by Bazuna to keep his side in front.

In the dying embers, it looked like the equaliser was on the cards as Ro-Shaun Williams fired a low effort wide of the mark which surely would have given Salop a well-deserved point.

Match passes are available to purchase for Town's home clash with Rochdale.

iFollow passes are now available for supporters who are wanting to watch Town's Sky Bet League One game against Rochdale. 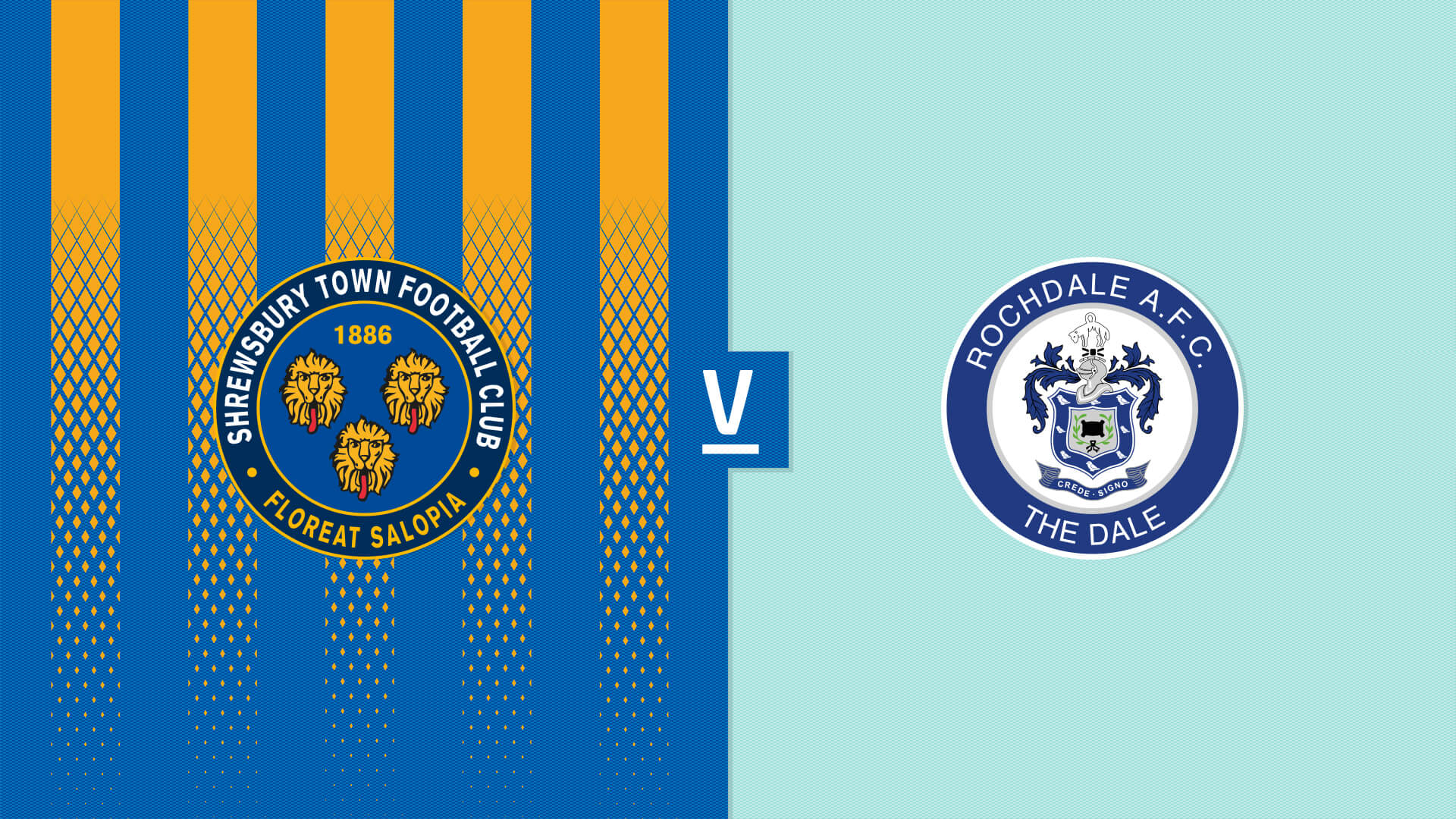 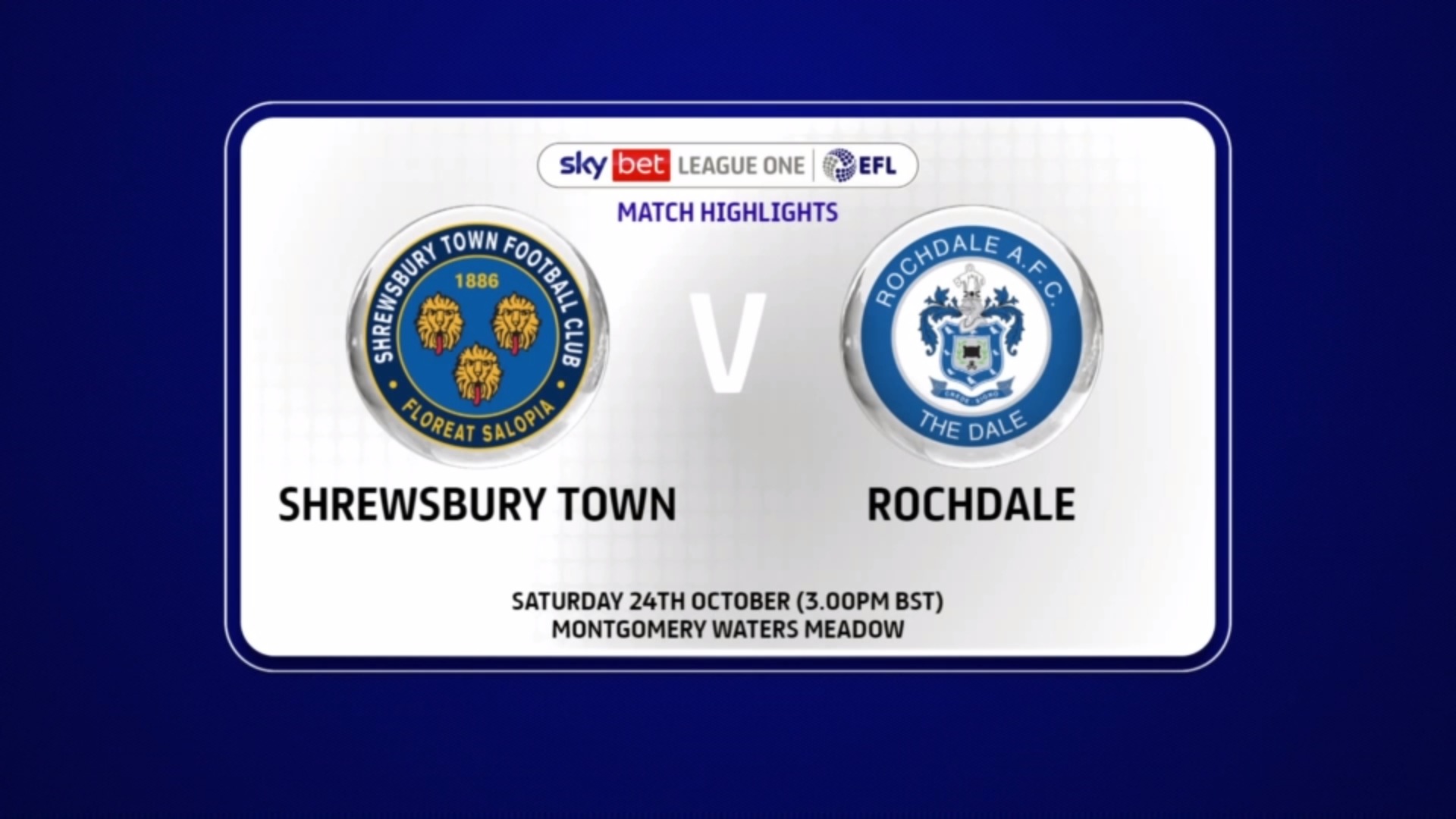 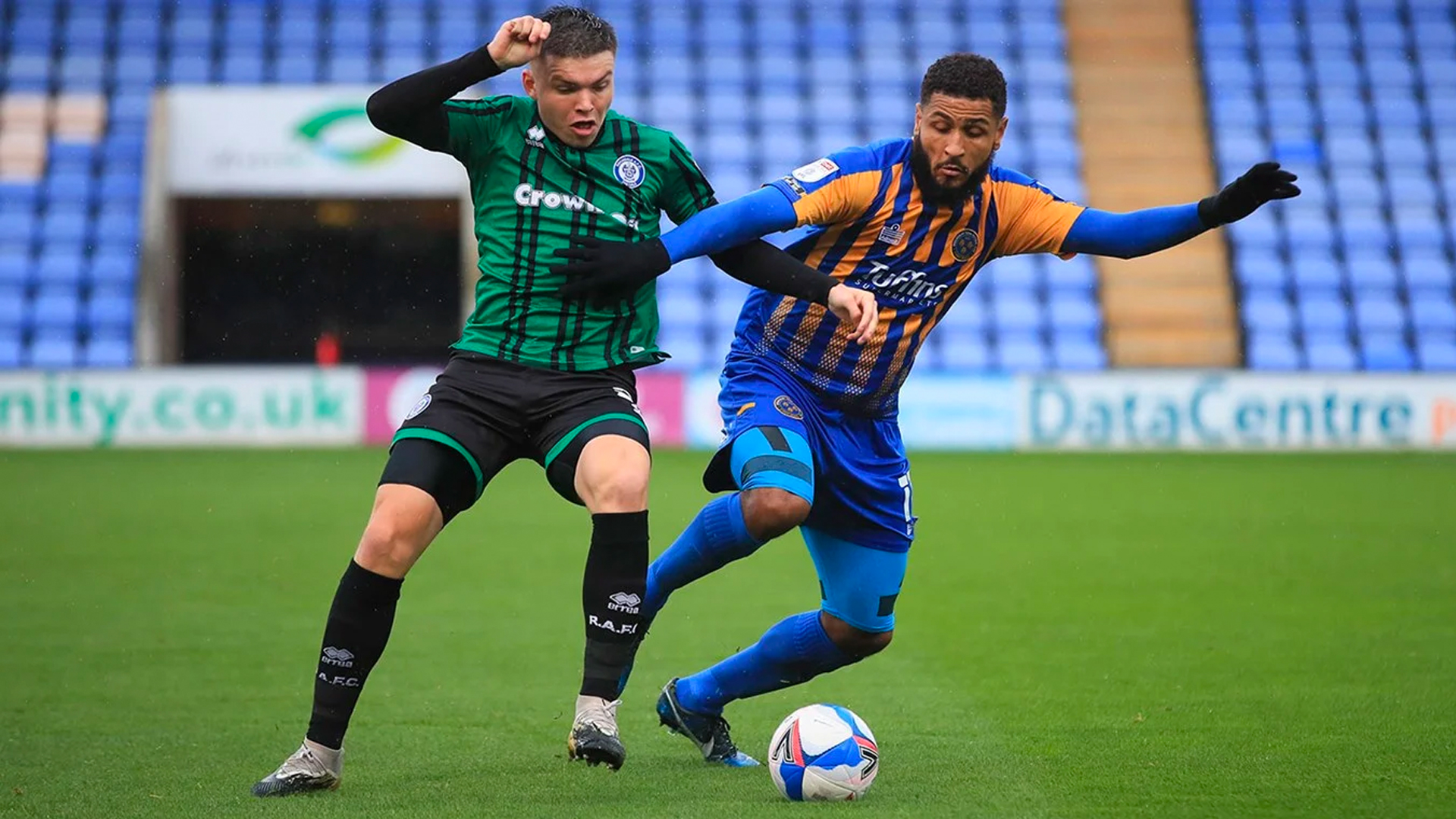