Shrewsbury Town's first away fixture of the 2021/22 campaign ends in defeat against Morecambe.

In their first away trip of the season, Shrewsbury Town were welcomed to the northwest by hosts Morecambe, with Steve Cotterill’s side looking to build on from their midweek win against fellow League One outfit Lincoln City in the Carabao Cup.

Played out in front of a packed Mazuma Stadium, a series of battling duels within the midfield characterised the first 10 minutes of the game, with both teams looking to take a hold of the match. It was Shrimps full-back Ryan Cooney who came closest to goal in the first 10 minutes, with his curling effort on the edge of the area going wide of the post, after former Town player Arthur Gnahoua cut the ball back to the defender in the sixth minute.

The first card handed out by referee Declan Bourne came in the 26th minute after Salop’s David Davis’ challenge on Shane McLoughlin resulted in the midfielder being booked. The visitors continued to test the physicality of the hosts, with striker Rekeil Pyke being at the end of the referee’s whistle a number of times in his first start of the season.

Sadly, it was Stephen Robinson’s men who took the lead, after youngster Nathanael Ogbeta got tangled with Adam Phillips in the box, bringing him down and giving away a penalty to the home side. It was the fouled Phillips who stepped up, placing his effort away from ‘keeper Marko Maroši and into the back of the net, giving the hosts a one-nil lead after 32 minutes.

With the atmosphere building around the ground, the host's second came not long after, with goalscorer Phillips whipping the ball in from the corner flag, falling to striker Cole Stockton who - in the 44th minute - doubled the Shrimps’ lead on the stroke of half-time. Both sides entered the tunnel after the referee’s whistle, with the hosts on top, having the lion’s share of chances and not allowing Shrewsbury a way through at any stage.

Steve Cotterill’s side started the second-half well, looking to reduce their two-goal deficit by bringing on new signing Sam Cosgrove, who replaced youngster Nathanael Ogbeta at half-time. Both sides were equally matched, with Salop having a number of attacking movements that fizzled out, the closest coming from defender Aaron Pierre whose headed effort went wide of the goal.

Morecambe midfielder Shane McLoughlin was awarded the first card of the half, after his challenge on attacker Rekeil Pyke drew a yellow from the pocket of Declan Bourne nine minutes into the second-half. A cross from wing-back Elliot Bennett four minutes on from McLoughlin’s card was claimed by the gloves of ‘keeper Jökull Andrésson, who set off a counter-attack for the Shrimps that came to no avail, a low cross from winger Arthur Gnahoua failing to find the feet of a Morecambe player.

Cotterill’s second change to his side came just a minute after, with Joshua Daniels replacing striker Pyke, moving captain Elliot Bennett into midfield. With both sides battling it out across the field, ‘keeper Marko Maroši, was forced to make a fine save in the 61st, beating away the effort of goalscorer Cole Stockton. Morecambe full-back Ryan Cooney was given a yellow card shortly after, following an altercation amongst Salop players. The Shrimps then made their first change of the game, with goalscorer Adam Phillips being replaced by Alfie McCalmont in the 63rd minute.

With the hosts still ahead, they continued to maintain their tempo that forced the Salop defence to stay on their toes. Defender Aaron Pierre was booked in the 66th minute, following his efforts in preventing striker and goalscorer Cole Stockton from playing the ball through on goal. The second-half continued to stay lively, with neither Cotterill nor Robinson’s men showing signs of giving in. Robinson made a change in the 78th minute, substituting Joshua McPake for Wesley McDonald. Steve Cotterill also made a change, his third of the game coming in the 80th minute, replacing captain Elliott Bennet with youngster Tom Bloxham, the scorer of the winning penalty on Tuesday night. Despite intentions to score, Steve Cotterill’s side continued to be tested defensively, with Marko Maroši yet again being forced to make a save from Wesley McDonald’s low effort.

Shrewsbury continued to fight back as the game approached full-time, but they failed to find a way past Morecambe. A through ball from Dan Udoh eventually found newcomer Sam Cosgrove, whose effort was hit over the bar, failing to test the gloves of Shrimps Joküll Andrésson. Shortly into added time, the Shrimps’ keeper was forced to claim defender Matthew Pennington’s looping header, as Salop squandered their last chance to take a goal away with them. The referee blew his whistle not long after, giving the hosts their first win in the league and visitors Shrewsbury a tough loss on the road.

Steve Cotterill’s side continue their league campaign on Tuesday with yet another away trip, taking a trip down to the south-coast to face Portsmouth, as they look to bounce back from two losses so far in the league.

Tickets are now on sale for our trip to Sky Bet League One newcomers Morecambe.

We have been allocated 650 tickets for the game and Town fans will be housed in the Dennison’s Trailers Terrace (Standing) and the Beyond Radio A Stand (Seating).

There is no price increase on the day.

Wheelchairs are charged at the same age groups, Carer tickets are free of charge if required.

Tickets go off sale from the ticket office at 2pm on Friday 13th August. 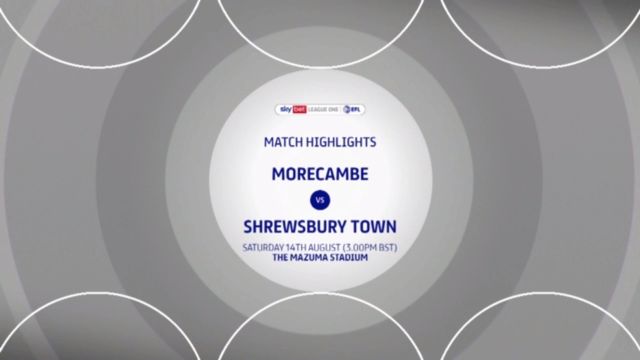 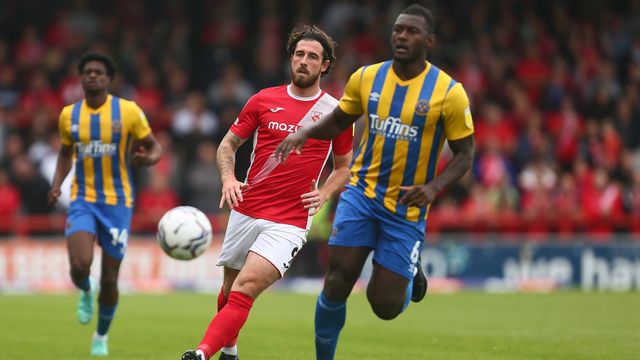