Shrewsbury Town are back on the road tomorrow as they travel to Devon to face Plymouth Argyle at Home Park.

After four consecutive draws, Salop will be hoping this is the game that finally yields the three points they’ve come so close to in recent weeks. Plymouth head into this fixture off the back of a convincing victory on Tuesday night – a 4-1 win away at Crewe Alexandra. Argyle were losing at half-time, but three goals in eight minutes at the start of the second half quickly changed things around before Ryan Hardie’s 85th minute (hattrick completing) goal put the result well beyond doubt.

As ever, a victory is important for both sides as Salop look to pull away from the teams below them and Plymouth look to make the short leap into the play-offs.

Argyle sit in 8th place, three points behind Wycombe Wanderers – who occupy the final play-off spot – but they have a game in hand over the Chairboys. They are a side who are more than capable of scoring goals and boast the joint-fourth highest number of goals scored in the league, the most out of anyone outside the top five. The reverse fixture was back in August and saw the visitors pick up all three points at Montgomery Waters Meadow.

Scottish striker Ryan Hardie is without a doubt Plymouth’s dangerman. He was an integral part of their promotion from Sky Bet League Two as a loan player and signed on a permanent deal halfway through the campaign. He already has 12 goals this season, got two goals and an assist in the reverse fixture, and scored his first hattrick of the season on Tuesday night.

The 24-year-old came through Glasgow Rangers’ academy before transferring to Blackpool in 2019. The Tangerines loaned him to Plymouth for 12 months before the deal became permanent. He is now approaching his 100th Argyle appearance and has 38 goal contributions to his name already.

Shrewsbury Town were forced to return to Shropshire empty-handed after going down by one goal to nil away at Plymouth Argyle.

The first effort on goal came from Panutche Camara who – shortly after kick-off – picked up the ball on the edge of the Town penalty box and sent a low drive goalward but Marko Marosi got down well to claim the shot.

Salop went straight up the other end and had their own dangerous effort when the ball fell to Josh Vela on the penalty spot, but Macaulay Gillesphey put his body on the line to block the fierce effort.

The chances kept coming as, in the 20th minute, Marosi was called into action yet again, this time providing a fingertip save to turn Jordan Houghton’s effort over the bar.

Plymouth controlled the next 20 minutes of play but failed to trouble Marosi or his defenders during that period. They almost paid the price for that when, just before half-time, Salop went close three times in quick succession. The first was George Nurse’s cross-cum-shot from a free-kick that ended up sailing towards the back post where Michael Cooper palmed it over. From the resulting corner, Ethan Ebanks-Landell almost got on the end of the dangerous ball at the back post and, from another corner, Matthew Pennington headed a well-connected effort goalward but, again, Cooper was equal to it.

Argyle started the second half brightly and almost opened the scoring immediately from kick-off as Danny Mayor tried to curl an ambitious effort past Marosi and into the bottom left-hand corner of the net but, thankfully for Salop, it went just past the post. They went close again moments later and would’ve almost certainly taken the lead had Pennington not put in a great sliding challenge to intercept a low cross to the unmarked Ryan Hardie – who was waiting at the back post.

Unfortunately for Town, the hosts’ next effort saw them take the lead as a low ball from the right-wing found its way as far as the penalty spot and the onrushing Conor Grant slammed the ball into an empty net for the opening goal in the 63rd minute.

The game developed into a scrappy affair from this point on but Shrewsbury were having more possession now. However, they were unable to trouble the Argyle defence and a few clearances was all it took to keep Town at bay and send them home to Shropshire empty-handed.

Jordan Houghton picked up the first booking of the game for a late and clumsy sliding challenge on David Davis in the first half. Josh Vela then picked up a yellow card for a similar challenge on Panutche Camara just moments later.

Camara was the next man to receive a yellow following an off-the-ball incident with Davis – the Shrewsbury Town players suggested there was a headbutt involved.

Finally, James Bolton was booked for a foul in the 80th minute.

Tickets are now on sale for our trip to Plymouth Argyle next month.

Ticket details for our SkyBet League One trip to Plymouth Argyle.

Tickets are now on sale for our Sky Bet League One trip to Home Park.

We have been allocated 436 tickets for the game and Town fans will be housed in the Barn Park Stand.

Tickets go off sale from the ticket office and online at 2pm on Friday 11th February.

Any disabled fans requiring assistance should contact the Plymouth SLO on 01752 562561 ext 152 or email disability@pafc.co.uk prior to match day.

Plymouth offer a SoccerSight service which can be booked through the SLO above.

• Via our online ticketing site - https://www.eticketing.co.uk/shrewsburytownfc/EDP/Event/Index/628 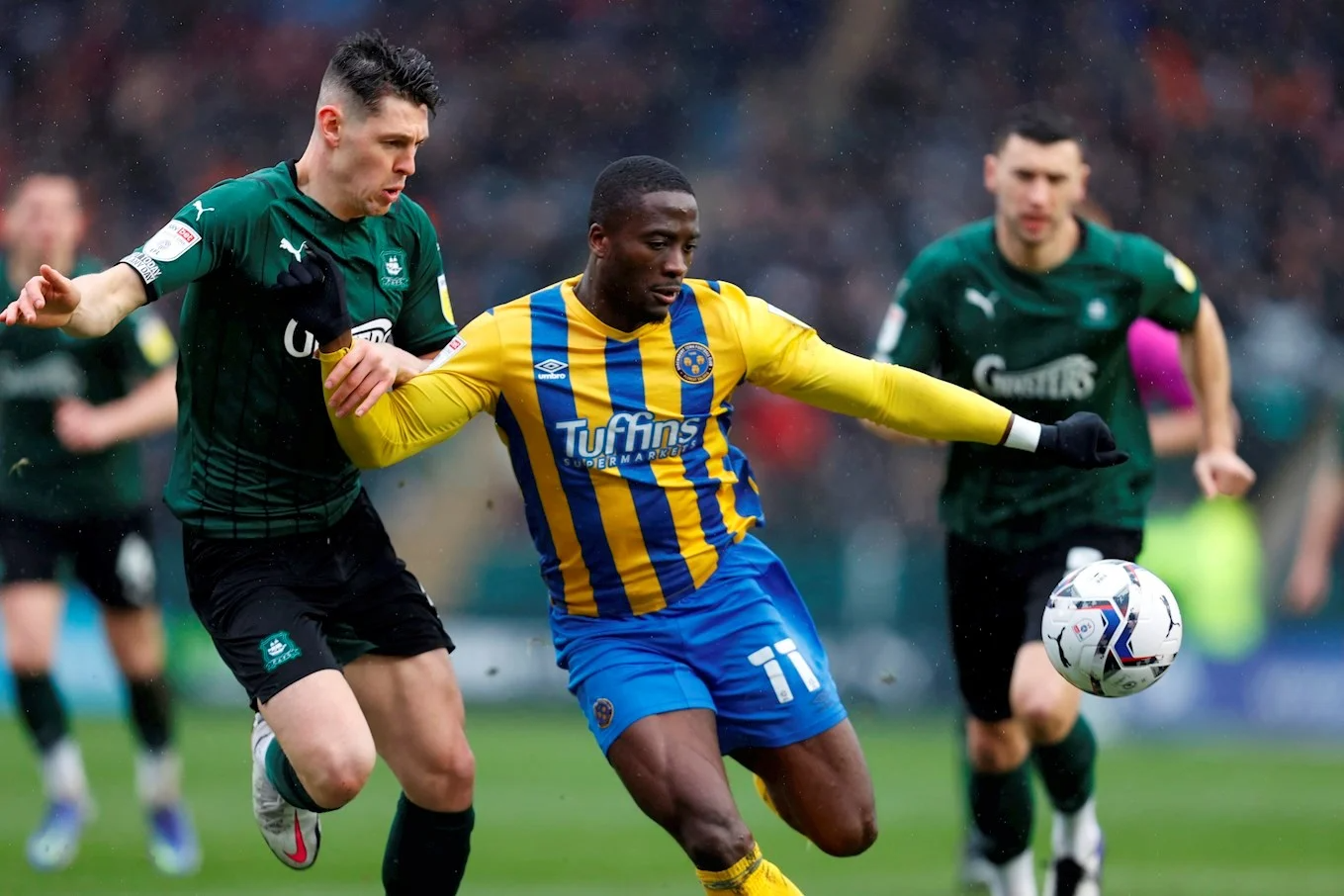 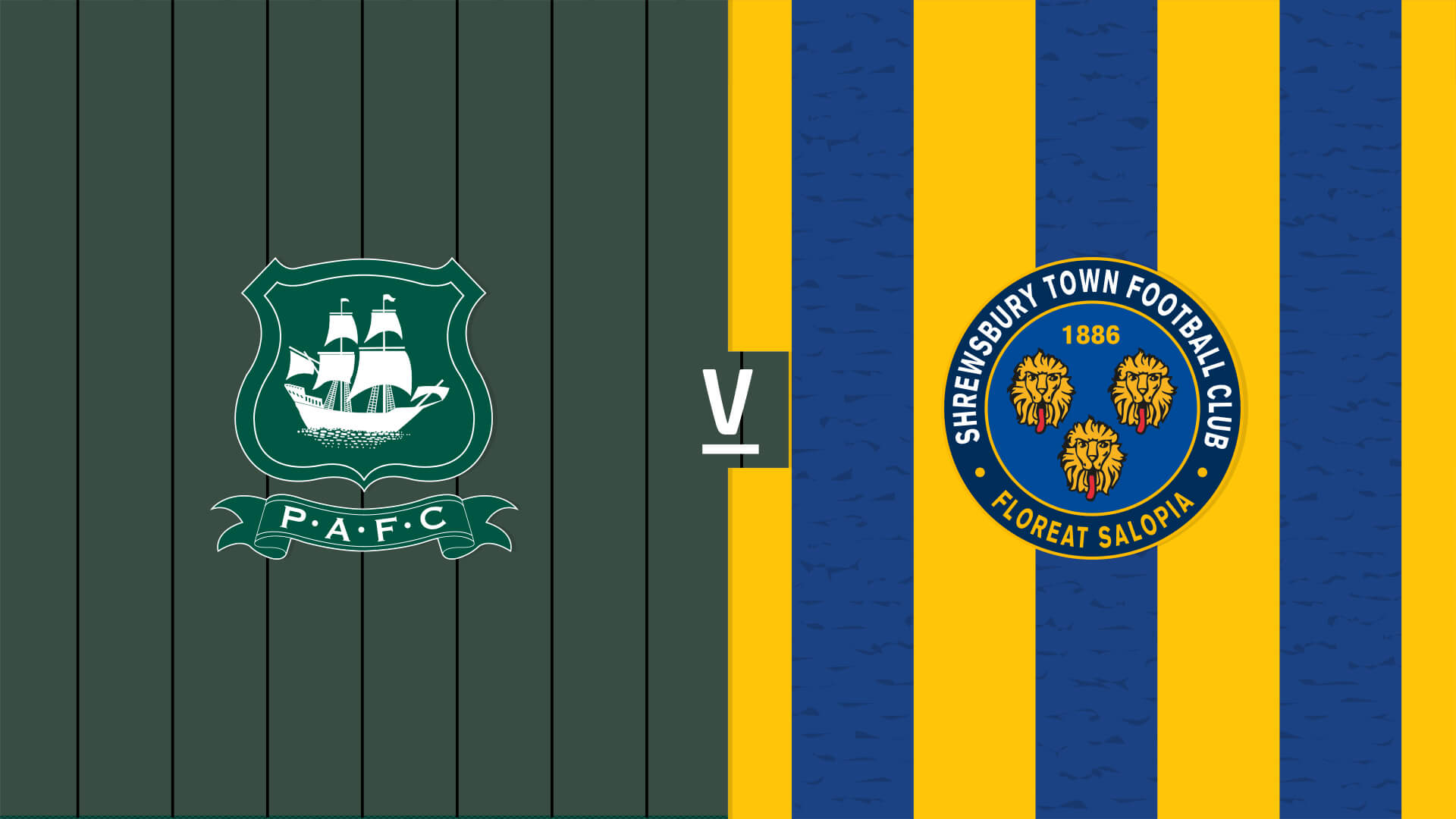 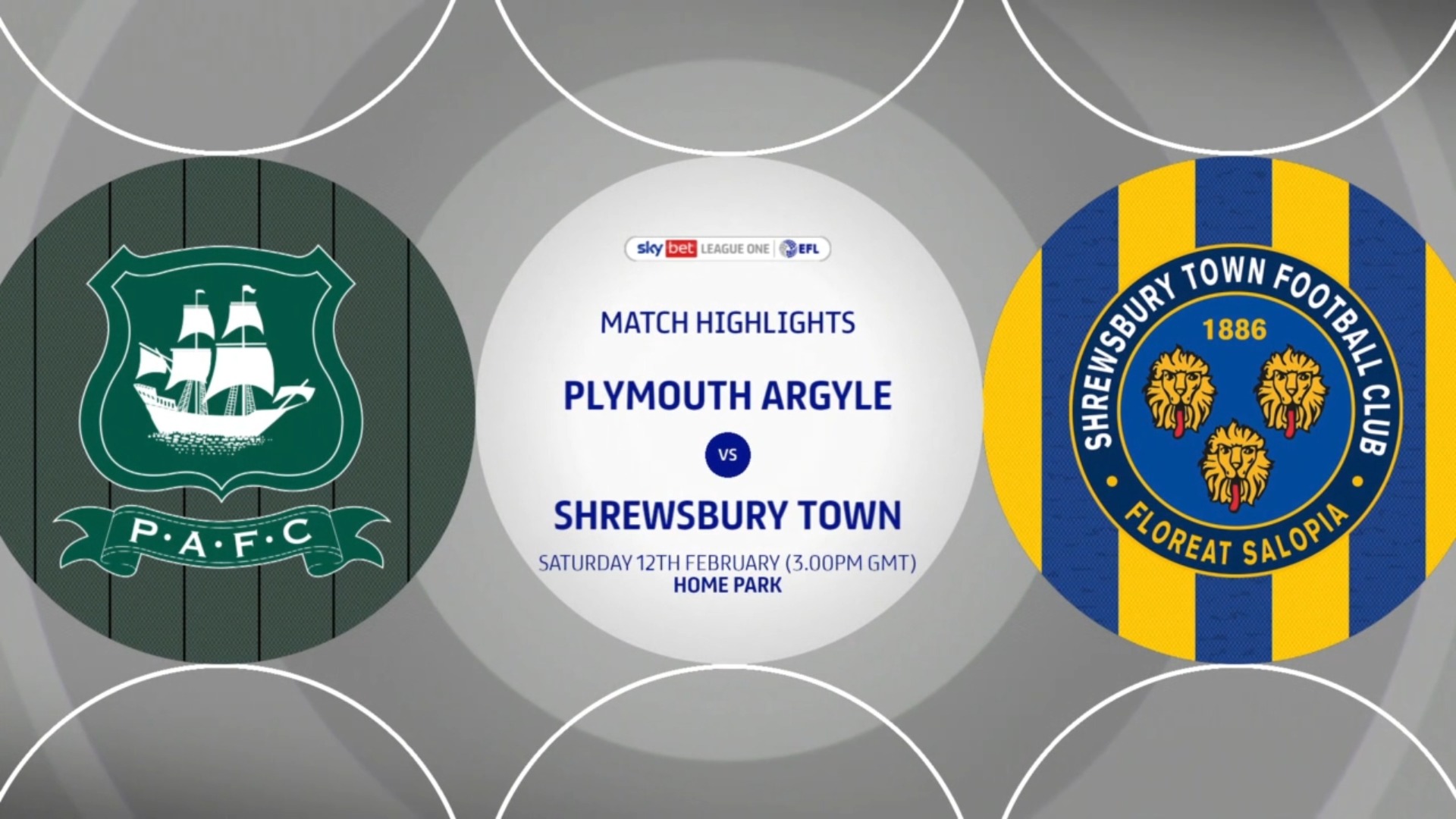