Take a look at the latest stats and facts ahead of Town's Sky Bet League One away fixture with Cheltenham Town at the The Jonny-Rocks Stadium.

Shrewsbury Town will be looking to move out of the relegation zone when they travel to mid-table side Cheltenham Town in Sky Bet League One on Saturday.

Steve Cotterill will look to continue his side's good form in the league after ten days without a game due to the international break with Town's most recent league results finishing in a win and a draw.

After a five year stay in Sky Bet League Two, Cheltenham Town returned to the third division following their title winning season and have so far enjoyed a solid start to their season. They are currently sat in 16th place and are so far not looking like a side that will be dragged into a relegation battle as the season progresses.

Managed by club legend Michael Duff who returned to the club back in 2018, the Robins have had some decent results so far this season, with a decent 2-1 win away to Charlton Athletic and impressive draws away to Portsmouth and at home to Sheffield Wednesday. The club will be looking to build on these results against Salop on Saturday.

He is currently the club’s top scorer this season, having scored five goals in all competitions whilst also registering two assists as well. Salop will need to be on top form if they’re to keep May and Cheltenham quiet on Saturday.

Shrewsbury Town's venture to the Jonny-Rocks Stadium ultimately ended in disappointment with the home side securing a 2-1 win.

Despite Town taking the lead early on, the home side were able to bounce back with two goals to secure all three points.

With just over a minute on the clock, the home side were given an early chance to take the lead from a set-piece just outside the box. Matthew Pennington's slip and subsequent foul lead to Kyle Vassell striking a free-kick just over the bar.

An outstanding response was demonstrated by Steve Cotterill's men two minutes later in the opposition's half. Luke Leahy fired a pass into Dan Udoh, and still with work to do, Udoh beat his man and lashed a powerful effort through the 'keeper and into the back of the net to gain the lead.

24 minutes in, Town were shown a straight red card and the home side were given a penalty following Elliott Bennett goal-line handball from Dan Crowley's strike from inside the box. Conor Thomas stepped up for the spot-kick and slotted the ball into the bottom left corner to pull the Robins level.

Towards the very latter stages of the half, the Robins had a chance to pull ahead. Crowley fed a smart pass into the path of Matty Blair but Michael Duff's number 17 was unable to beat Marosi at his near post.

Despite Salop attacking Scott Findlers' box with multiple corners, it was the home side that managed to find the go-ahead goal in the 66th minute. An ever-present threat, Crowley dribbled through Town's defence only to hit the post from close range. However, to the delight of home supporters, Kyle Joseph was able to tap home from a yard out to secure the goal.

Unfortunately for Town, and despite a battling performance with 10 men, the game came to an end with Salop leaving empty-handed.

Following a slip and a foul, Matthew Pennington was shown a yellow card with just 43 seconds on the clock.

Elliott Bennett was shown a straight red card for denying a goal-scoring opportunity with a handball in the 23rd minute.

Ryan Bowman was shown a yellow card in the 55th minute for dissent.

Luke Leahy was booked for a foul in the middle of the park with 78 minutes on the clock.

Ticket details for our Sky Bet League One trip to Cheltenham

Tickets are now on sale for our Sky Bet League One trip to Cheltenham.

There is 1 pair of Disabled and Carer Wheelchair bays available.

Tickets go off sale from the ticket office and online at 2pm on Friday 19th November. 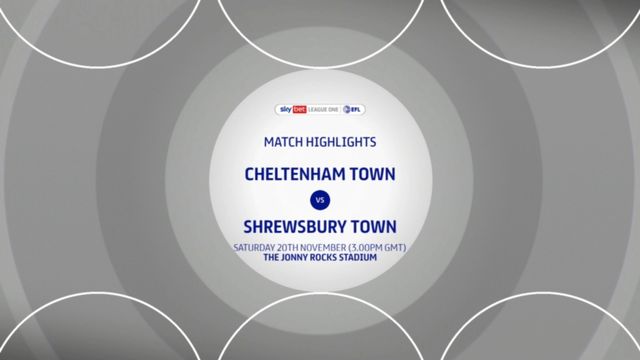 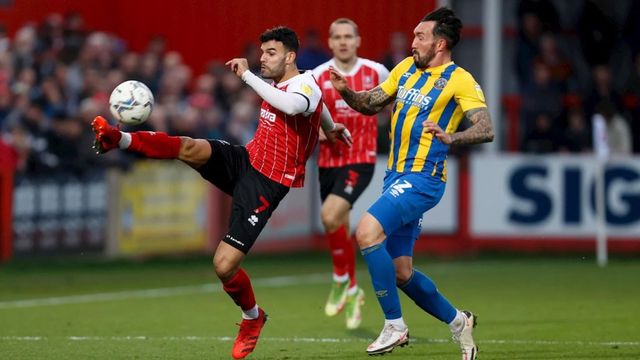