Shrewsbury Town continued their Sky Bet League One campaign with a trip to the Crown Ground, losing 1-0 to hosts Accrington Stanley.

Town entered their fixture with Accy having secured their first league win of the season last weekend, following their 1-0 win against Gillingham thanks to goals from Tom Bloxham and Sam Cosgrove – the first being simply sublime. Accrington’s most recent game ended in a 2-0 defeat to MK Dons, ending their three-game unbeaten run.

Steve Cotterill’s side started the game on the front foot, testing the alertness Accy defence early on. Sam Cosgrove’s interception in the third minute allowed the striker to play through George Nurse, however his strike failed to hit the target. The hosts had their first approach on goal in the tenth, with Joel Mumbongo’s attempt being cut out by the sliding Aaron Pierre, with calls for a penalty waved away from referee Anthony Coggins.

With Coleman’s side now settled into the game, it was not long before they took the lead, Mumbongo making up for his missed chance earlier on. Ross Syke’s cross into the area found Colby Bishop, whose effort from close-range produced a remarkable save from Salop’s Marko Maroši, however it was not enough to stop Mumbongo who tucked the ball away on the follow-up. With the hosts now a goal ahead, Cotterill’s side looked to quickly respond, and did so just a minute on from the opener. Josh Vela’s cross from a counter found Tom Bloxham, whose powerful volley produced a strong save from the flying Toby Savin, denying an equaliser for Cotterill’s men. With the game growing more contentious with time, Coggins’ eventually awarded the first booking of the game, Salop midfielder Vela being at the receiving end following his challenge on Accy captain Sean McConville.

Coggins pockets were later called upon as the game approached half-time, with Matthew Pennington’s follow through on Matt Butcher deserving of a yellow in the referee’s eyes. An effort from Cosgrove shortly after came to no avail, being struck wide of the goal, and it was not long after when the striker received a yellow for his challenge on Ross Sykes shortly before the whistle was blown for half-time.

With the second-half underway, Salop were quick to commence their search for an equaliser. Dan Udoh’s through ball to Elliott Bennett just a minute on from kick-off, gave the wing-back time to provide a goal ball across the face of goal, however it failed to reach the boot of a Salop player. With both team finding their feet, chances soon began to come from both ends. A looping ball over the Town defence in the 58th gave Accy captain McConville a clear chance on goal, however he failed to put it away, with Maroši doing well to block the ball away from goal.

With both sides continuing their battle, George Nurse was awarded a yellow for his challenge on Mitch Clark in the 61st. The hosts made their first change of the game five minutes on, with Jovan Malcolm replacing goalscorer Mumbongo. Salop soon made their first change, with George Nurse making way for Nathanael Ogbeta, the visitors in search of an equaliser. Salop eventually found their way up the field, with Dan Udoh being scythed down by David Morgan as the attacker looked to progress up the pitch – the challenge deserving of a yellow card. Coleman made his second change of the game, replacing Matt Butcher with debutant Ethan Hamilton, with the Accy boss looking to secure his fourth win of the league season. The battle for the next goal continued to play out, but neither of the two teams could find the net. Dan Udoh’s effort from the edge of the area was comfortably saved by Savin in the 76th, and the hosts were quick to respond. Accy’s advances on goal a minute on from Udoh’s effort produced two strong saves from Maroši, the ‘keeper keeping his side in the game following long-range efforts from midfielders Hamilton and Pell. Cotterill then made his second change of the game, looking to freshen legs up top by replacing Udoh with Shaun Whalley eight minutes from time.

With full-time soon approaching, and Salop yet to find an equaliser, they continued to batter away at the Accy defence. A speculative effort from Ogbeta forced Savin to parry the ball away for a throw, with Cotterill’s side relentlessly pursuing chances on goal. Just before the fourth official indicated for nine minutes of added time, Cotterill made his third and final change in the game, replacing youngster Bloxham with Ryan Bowman. But despite Salop’s attacking intent, the hosts continued to knock on Salop’s door. Accy substitute Hamilton found space on the edge of the area, hitting a low shot towards goal that was palmed away by Marosi, with Malcolm curling the ball wide on the follow up. A series of aerial duels and searching balls characterised the remainder of injury-time, with full-time handing Salop another loss in their 2021/22 Sky Bet League One season.

Josh Vela was booked in the 25th minute, following a strong challenge on Accrington’s Sean McConville.

Matthew Pennington was booked in the 44th minute for his challenge on Matt Butcher.

Sam Cosgrove was booked in the 45th minute, following a late foul on Ross Sykes.

George Nurse was booked in the 61st minute, following a foul on Mitch Clark

Accrington’s David Morgan was awarded a yellow card in the 65th minute, following his late challenge on Dan Udoh.

We have been allocated 539 tickets for the game and Town fans will be housed in the Coppice Terrace (Standing) and the Studio Stand (Seating).

Tickets go off sale from the ticket office and online at 2pm on Friday 3rd September. 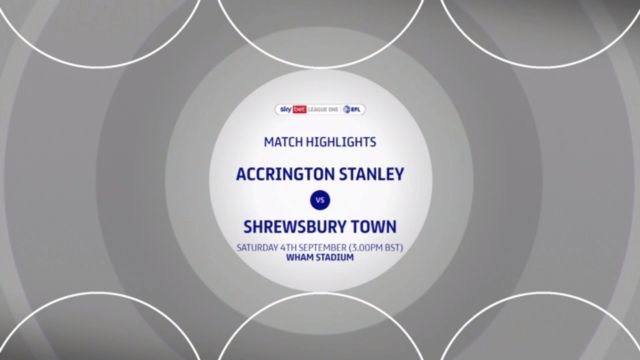 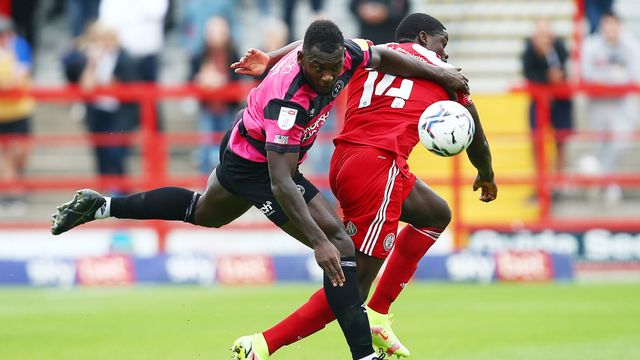