Shrewsbury Town travel to the Memorial Stadium this Saturday, to take on Bristol Rovers in the Sky Bet League One.

Rovers fell to a 3-1 defeat away at Portsmouth last Saturday, with Aaron Collins grabbing the only goal for his side. Salop’s weekend fixture also ended in defeat, as top of the table Ipswich Town won 3-0 at Montgomery Waters Meadow last Saturday.

On Tuesday night, Shrewsbury exited the second round of EFL Cup in a narrow defeat to Championship side Burnley. Samuel Bastien grabbed the winner for Vincent Kompany’s side in the second half.

Rovers currently sit in 15th place, with two wins and three losses from their first five league games. Most notably, they recorded a 4-0 away win at Burton Albion in the second game of their season with all four goals in the first half of the game.

This will be the 70th meeting between the sides, with 21 ending in victory for Shrewsbury, 16 in draws, and 32 in defeat. In the 2020/2021 season, Rovers recorded a 1-0 win away at Montgomery Waters Meadow and a 2-1 win at the Memorial Stadium.

One to watch: Aaron Collins

Striker Aaron Collins has already found the back of the net four times this campaign and scored in Rovers' most recent outing against Portsmouth. As his side earned promotion to League One, Collins ended the season with 18 goals and was the club top scorer. The Welsh forward was previously at Forest Green Rovers before making the switch to Bristol Rovers in June 2021.

The hosts opened the scoring mid-way through the second half as Ryan Loft converted from the inside box following a cross.

Town remained resilient and fought back to level the score in the final 10 minutes.

Bowman secured his first goal of the season as he poked home from set-piece specialist George Nurse's cross.

Boss Cotterill opted for a 3-4-2-1 formation against the Gas with Dan Udoh leading the line.

Jordan Shipley and Tom Bayliss were deployed as attacking midfielders, with the versatile Taylor Moore and Luke Leahy the deeper midfielders.

Bristol Rovers lined up in a 4-2-3-1 system with John Marquis up front. Aaron Collins and Harry Anderson were on the flanks with Antony Evans in the number ten role.

Town started the game on the front foot, but Rovers created the first clear-cut chance.

Marquis collected the ball in the box before twisting and turning to find himself some space.

But while he was able to get his shot away, Chey Dunkley made a brilliant block to force the ball out for a corner.

Mid-way through the half, the Pirates had another chance to open the scoring.

Following a free-kick, Anderson rose highest to meet a dangerous ball. But he planted a header against the post with Town then able to clear.

Shrewsbury responded and went on to have a flurry of excellent chances to break the deadlock before half-time.

Udoh put Alfie Kilgour under immense pressure by pressing high with the defender then playing a back-pass that almost crossed his own goal-line but was just cleared by goalkeeper James Belshaw.

Cotterill was forced into a change in the 41st minute with Udoh hobbling off after picking up a knock.

He was replaced by Rekeil Pyke – with Shrewsbury going on to create more clear-cut chances before the break.

Nurse had the first opportunity with a long-range effort but was blocked by the Rovers' defence.

Cotterill's men then went even close when Moore let fly with a powerful low drive from 20-yards that Belshaw did well to get down and parry away.

The ball fell for Pyke, who turned sharply in the box before firing inches past the post.

With the wind in their sails, Town threatened once more before the break – with Nurse finding Shipley in the area who drilled a strike wide.

Salop came out of the block lively in the second half and nearly broke the deadlock.

Shrewsbury switched to a 4-3-3 system when Bowman came on for Julien Dacosta ten minutes into the second half.

Bowman led the line with Pyke and Shipley moving to the flanks and Bayliss in the advanced midfielder role.

Leahy and Moore remained the same as well as the defence as Matthew Pennington moved to right-back.

Nurse sent a ball into the danger area after the system switch, but Luca Hoole did well and cleared for Town to win a corner.

Salop had a second chance from the corner as the ball reached the feet of Moore, who let fly from distance but fired wide.

Moore was the architect for another Salop move just after the hour mark.

He made a pass out wide to Nurse, who sent in a dangerous-looking cross that Bayliss was able to meet. However, his header was parried away by the acrobatic keeper.

Collins put a low-driven cross into the middle of the box, and Loft slotted it into the bottom corner.

Shrewsbury drew level with ten minutes to go as Bowman converted from close range. Nurse sent a corner into the heart of the box, and Bowman was able to poke it home after a scramble in the box.

There were six minutes of time added on but Shrewsbury held firm and came away with a point.

Tickets are on sale for our Sky Bet League One trip to Bristol Rovers.

Ticket details for our Sky Bet League One trip to Bristol Rovers.

We have been allocated 399 tickets for the game and Town fans will be housed in the South Stand.

We also have six pairs of Wheelchair and Carer tickets available. Prices will be as above with a free carer. Please note these seats are in an uncovered area

Tickets go off sale from the ticket office and online at 12pm on Friday 26th August. 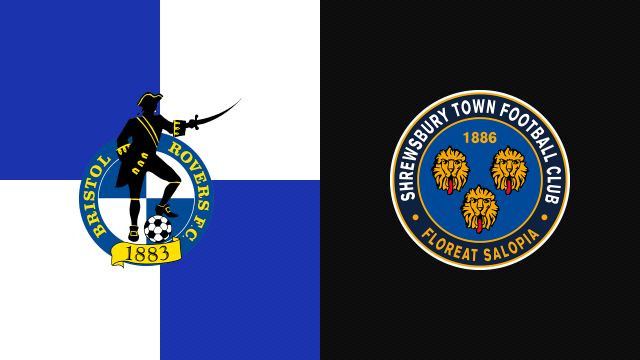 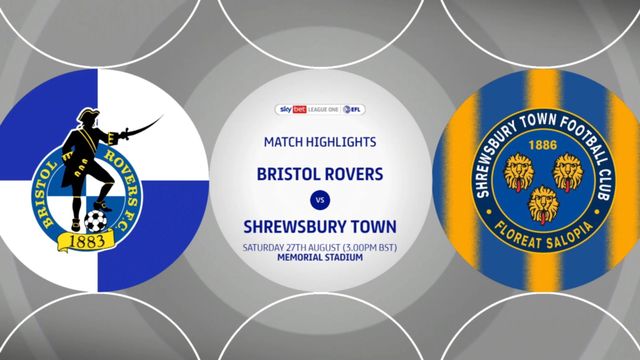 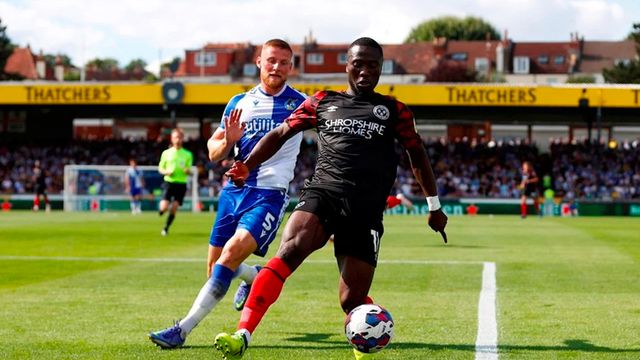