Steve Cotterill’s Shrewsbury Town achieved their first win of the season at Montgomery Waters Meadow tonight as they won 3-2 against Carlisle United in the League Cup.

Carlisle took the lead thanks to Ryan Edmondson, who struck home from inside the box in the 13th minute.

Town equalised in added time at the end of the first half when Luke Leahy struck a sumptuous free-kick in off the crossbar and then they took the lead in the 75th minute when Dan Udoh slotted the ball home.

Carlisle pegged Salop back with a goal from Kristian Dennis but couldn't hold on as Town's Chey Dunkley poked home what proved to be the winner.

Ryan Edmondson got on the scoresheet early for Carlisle as he scored from inside the box. The Carlisle goal originated from the right-hand side as Sonny Hilton crossed low, and the ball fell to the feet of Edmondson, who drilled it into the bottom corner to open the scoring.

Shrewsbury Town’s first chance of the game came from a free kick which Tom Bayliss took. Bayliss played the ball off to Jordan Shipley, who drove inside and crossed the ball across the goal. The ball landed at the feet of Tom Flanagan, and he attempted to cross the ball back into the box, but Tomas Holy got to the ball.

Early in the first half, Shrewsbury countered inside the Carlisle half, and the ball landed to Rekeil Pyke, who drove down the wing and crossed a ball into Luke Leahy who shot from just inside the box but could only hit the post.

Shrewsbury was dominating after the Carlisle goal and had an opportunity to level the score as Salop orchestrated a quick passing move which ended up at the feet of Matthew Pennington, who entered the box and shot, which was destined for the bottom corner however Holy reacted quick and parried it away.

Carlisle had a chance to take the lead to two in the 27th minute as Omari Patrick used some fancy footwork to enter the Salop box however when Patrick released the shot Marko Marosi got down quickly and reacted well to remove the ball from danger.

Shrewsbury got their scoring underway just before halftime as Luke Leahy took a free kick from just outside the box. Leahy and Tom Bayliss stood over the ball before the captain took over and let leash, and the ball hit the bar and went in to take the score line to 1-1.

Jordan Shipley had a long-range effort early in the second half after Salop combined down the right. The ball arrived at the feet of Shipley, who drove with it and let loose just before the 18-yard box however Holy managed to parry it away for a Shrewsbury corner.

Shrewsbury had a series of corners ten minutes into the second half and the final one nearly created a goal as Leahy floated the ball in from the left, and Pennington leapt high and got his head to the ball, however it could only go over the bar.

After putting pressure on the Salop box, Carlisle gained a corner on the hour mark. The corner came from the left-hand side, and the ball was sent to the back post, where their captain Corey Whelan met the ball but sent it wide.

Shrewsbury got their second goal in the 75th minute as substitute Julien Dacosta crossed the ball in from the left, and Dan Udoh leapt high and got the ball under control with his chest. Once Udoh got control of the ball, he swivelled and drilled the ball into the bottom left corner to take the score to 2-1. Udoh’s goal gets his scoring record up and running for the season.

Carlisle got a goal back in the 82nd minute as Owen Moxen played a long ball from the left-hand side, and the ball reached the feet of substitute Kristian Dennis, and he managed to poke the ball past Marosi to take the score to 2-2.

In the 85th minute, Chey Dunkley got on the scoresheet to take the score to 3-2. The situation arose from a set piece, and the ball entered the Carlisle box. Matt Pennington rose high in the box to bring the ball down, and Dunkley managed to bundle the ball into the back of the net.

Tickets are now on sale for our Carabao Cup Round One home fixture with Carlisle Utd.

Carabao Cup Round One

This game is not included for Season Ticket holders and they will need to purchase a ticket for the game.

The Rybrook Shrewsbury (West) Stand is closed for this game.

Tickets will be available to be added to your mobile device as a QR code and saved in your emails for use at the turnstiles.

Ticket Office opening hours are 10am – 5pm Monday and Thursday, 10am - 2.30pm Tuesday, Wednesday and Friday and 10am-kick-off on a matchday Saturday.

Tickets can be purchased in the following ways:
In-person at the Montgomery Waters Meadow ticket office
• By calling 01743 273943
• Via our online ticketing site - click here 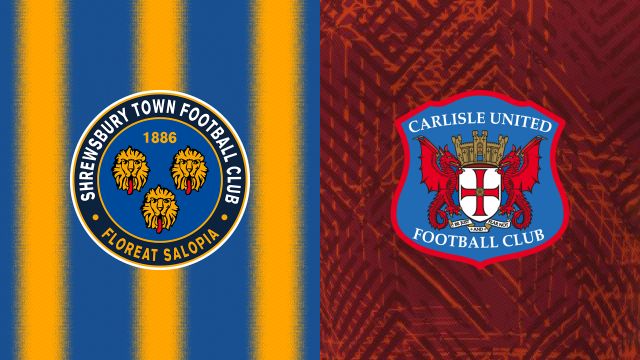 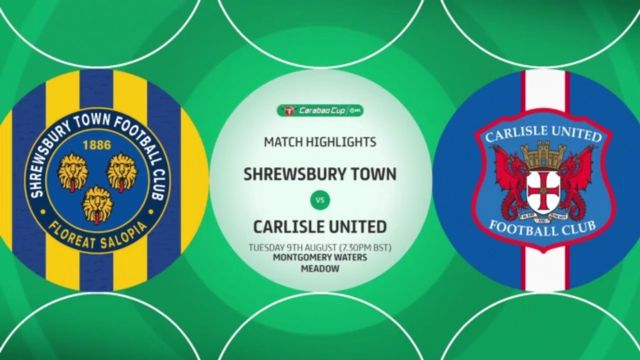 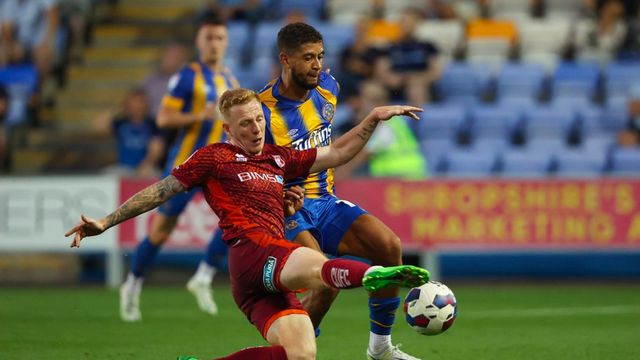