Shrewsbury Town welcome Championship side Sunderland to Montgomery Waters Meadow this Saturday. The FA Cup third round tie will kick off at 3pm.

Shrewsbury come into the game following a 3-0 loss in the league at home to Fleetwood Town last Sunday.

Visitors Sunderland drew their last game 1-1 away at Blackpool, with Ross Stewart equalising in the second half for the Black Cats.

Salop ensured they were in the third round after beating Peterborough United 3-1 at Montgomery Waters Meadow in November last year. Before this, Steve Cotterill’s side got through the first round courtesy of a 2-1 win at home against York City.

Shrewsbury and Sunderland have met 16 times before, with Salop winning two, losing 10 and drawing on four occasions. The sides last faced each other in League One last year in April, with Sunderland winning the game 3-2 at the Stadium of Light. The reverse fixture ended in a 1-1 draw in November 2021.

Founded: 1879 (144 years ago). Originally as Sunderland and District Teachers.

One to watch: Ross Stewart

Scottish striker Ross Stewart is the top scorer for the Black Cats this season, scoring an impressive nine times in just 11 matches. Before signing for Sunderland in January 2021, Stewart was previously at Ross County in the Scottish Championship and then the Scottish Premiership following their promotion in 2019. Whilst at Sunderland, Stewart has helped his side gain promotion last season from League One to their current status as a Championship club. 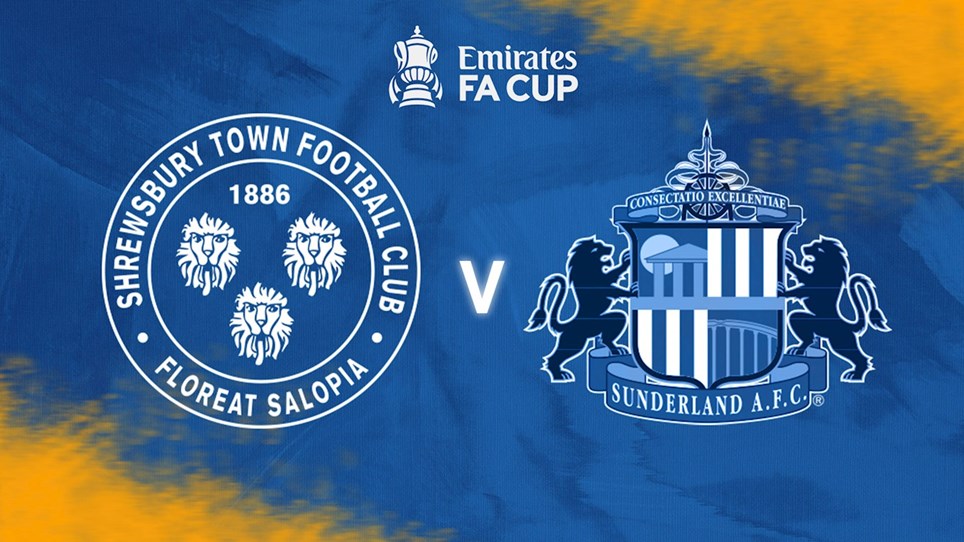 
Shrewsbury Town will welcome Sunderland to Montgomery Waters Meadow on Saturday 7th January 2023 for our FA Cup third round clash.

Shrewsbury Town fell to a late 2-1 defeat against Championship side Sunderland in the third round of the FA Cup on Saturday.

Town’s goal came from a Tom Bayliss corner which Matthew Pennington met and guided his header into the corner in the 81st minute.

The away side equalised in the 92nd minute through substitute Ross Stewart who headed home from a corner.

Two minutes later, Sunderland grabbed the winner through Luke O’Nien, who sent his shot into the bottom corner.

Steve Cotterill opted for a 3-4-2-1 formation at Montgomery Waters Meadow, with Aiden O’Brien and Tom Bayliss operating just behind Christian Saydee who lead the line.

O’Brien’s return to the starting line-up meant he made his second start of the season, having struggled with an injury since arriving in the summer.

New signing Killian Phillips made his first start for Town with the Irish midfielder also making his first appearance in the FA Cup.

After coming on as an early substitute for Tom Flanagan in the Fleetwood game Elliott Bennett returned to the starting line-up for the first time since November.

Julien Dacosta also returned to the matchday squad for the first since October when Salop travelled to Plymouth.

Sunderland went with a 4-3-3 system with Amad leading the line and Abdoullah Ba on the left wing and Patrick Roberts on the right.

In what was an exciting and impressive start, Shrewsbury flew out the blocks and created numerous chances to open the scoring inside the first 15 minutes.

We were almost ahead inside the opening 60 seconds when Saydee did really well to bundle his way past three players before finding Bayliss.

Town’s number 20 then sent in a floating cross to Jordan Shipley who, from just inside the box, fired agonisingly wide.

A few minutes later, Town won a free kick in the Sunderland half which got delivered to Matt Pennington who did brilliantly to meet the ball at the by-line.

The Salop centre-back then sent a cross into the heart of the box with a defender nipping in just before Shipley could get his shot away.

Shortly after, Steve Cotterill’s side went close again with what would have been a goal-of-the-season contender.

Luke Leahy did brilliantly to win the ball high before producing the most delicate of chips from 25 yards.

His effort beat Sunderland keeper Alex Bass but clipped the crossbar and bounced to safety.

All the momentum was with Town and new arrival Phillips went on a surging run following a terrific bit of skill from Bayliss on the half-way line.

The Crystal Palace loanee then entered the box before seeing a low drive well blocked by a defender.

Despite Town being the better side, Sunderland created one chance just before the break with Patrick Roberts sending a shot from outside the box inches wide.

O’Brien was taken off at half time and replaced by youngster Tom Bloxham which also meant a change in system with Steve Cotterill’s men reverting to a 3-4-1-2 system.

Just before the hour mark, Amad got on the end of a through ball and entered the Town box, but Chey Dunkley was there to meet the oncoming attacker and clear the ball from danger.

Substitute Ross Stewart met a through ball in the box and tried to tip it over the on-rushing Marko Marosi, but the Slovakian did well to deny the away side’s top goal scorer.

Roberts used his quick footwork to find his way into the box before releasing a shot which Marosi managed to keep out with a strong arm.

With just over 10 minutes remaining, Amad came close to opening the scoring for the visitors when his curling shot from outside the box went inches wide.

After a dominating performance, Town took the lead in the 81st minute when Pennington rose highest in the box to meet a Bayliss corner and head the ball into the corner.

Sunderland equalised in the dying embers from a Jack Clarke corner which Stewart headed home.

The Black Cats got a second in the 94th minute when Amad set O’Nien, who struck his effort into the bottom corner, which meant Shrewsbury’s FA Cup journey ended at the third round of the prestigious competition.


Shrewsbury Town will welcome Sunderland to Montgomery Waters Meadow on Saturday 7th January 2023 for our FA Cup third round clash.

The West Stand ticket office will be open for collections only on Saturday. Tickets are available in advance and on matchday from the main ticket office with a supporter number or proof of address. Fans are encouraged to buy their tickets in advance. 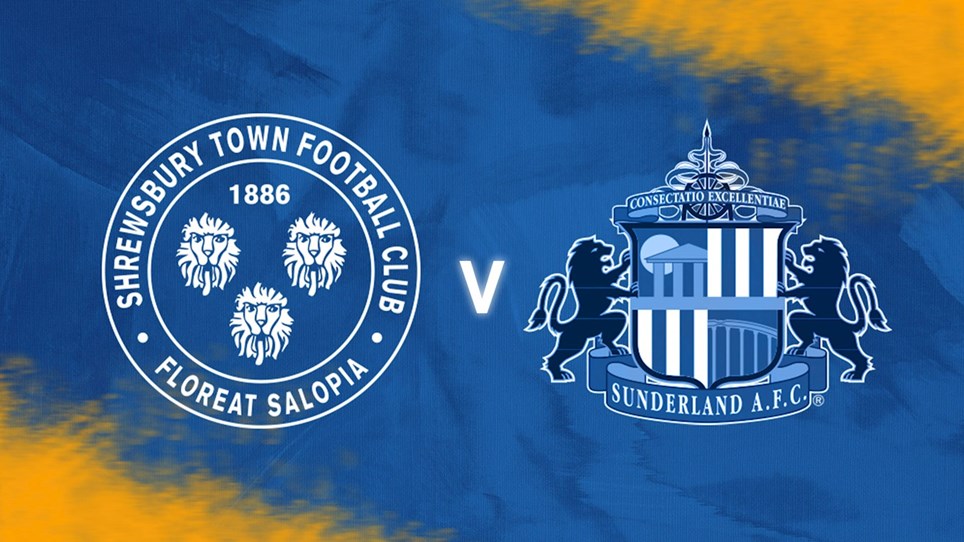 
Shrewsbury welcome Sunderland to Montgomery Waters Meadow in the third round of the Emirates FA Cup on Saturday, January 7.