On Tuesday night, an academy-focused side took on Port Vale at home in the EFL Trophy. The young side lost 4-0, exiting the competition but gaining valuable first-team experience.

Last Saturday, Shrewsbury fell to a late injury-time defeat away at Port Vale. Ellis Harrison put his side 2-1 up in the 91st minute to secure three points for the home team. Vale took the lead in the 9th minute before Christian Saydee responded by scoring his first goal for Salop in the 19th minute.

Burton’s EFL trophy game ended in a 3-2 win for the Brewers as they took on Sheffield Wednesday at Hillsborough. A goal each from Sam Winnall and Jonny Smith put their side ahead up before the hosts replied with two goals to make it even at 2-2 going into the break. A second-half Davis Keillor-Dunn penalty was then enough for Burton to secure the win.

In the league, the Brewers clinched their first win of the season beating Exeter City 2-0 away last Saturday. Deji Oshilaja and Davis Keillor-Dunn scored in the second half to send their side home with a valuable three points.

Shrewsbury and Burton have played each other 18 times, with Salop winning seven of those, drawing six and losing five. When the sides last met in February this year, Shrewsbury won 2-0 away at the Pirelli Stadium. In the reverse fixture, Burton won 1-0 at Montgomery Waters Meadow in August 2021.

One to watch: Davis Keillor-Dunn

Midfielder Davis Keillor-Dunn signed for Burton Albion in June this year and has scored four times in nine league appearances for his new side. Keillor-Dunn also grabbed the winner from the spot in Burton’s 3-2 EFL trophy win at Sheffield Wednesday on Tuesday. The 24-year-old has previously played for: Ross County, Falkirk (on loan), Wrexham and Oldham Athletic before his move to Burton.

Christian Saydee and Ryan Bowman were on target as they sealed a 2-1 victory for Shrewsbury against Burton Albion at Montgomery Waters Meadow.

Saydee was the first to convert as he out-muscled the Burton defender in the box to slot home calmly into the bottom corner.

The Brewers struck back in the 58th minute through Victor Adeboyejo who converted from close range.

However, substitute Bowman made an immediate impact as he tapped in a dangerous cross from Jordan Shipley in the 67th minute.

Boss Steve Cotterill opted for a 4-3-3 formation against the Brewers with Saydee leading the line, Rekeil Pyke on the right wing and Jordan Shipley on the left.

Meanwhile, Taylor Moore played alongside Chey Dunkley at centre back with Tom Flanagan away on international duty with Northern Ireland. Matt Pennington started at right back.

Burton also lined up in a 4-3-3 system with Adeboyjo their central striker. Davis Keillor-Dunn was on the left wing, with Jonny Smith on the right.

It was Burton who created the game’s first chance. Sam Hughes rose highest and met a dangerous cross from the right.

Marko Marosi, though, was equal to the effort and produced a fine save to tip the ball over the bar.

Shrewsbury went on to open the scoring in the 13th minute, with Saydee grabbing his second goal in as many games.

After collecting a flick-on from Bayliss, the striker showed bundles of strength to out-muscle his marker and enter the box.

The best, though, was still to come, with Saydee then arrowing a brilliant strike across goal and into the bottom corner.

Burton had a chance to equalise on the half-hour mark. Tom Hamer sent a long throw into the box that Hughes flicked goalward.

The ball looked destined to nestle in the back of the net, but George Nurse did remarkably well to sprint back and head the ball off the line.

However, it was Town who ended the half on the front foot and they had a chance to double their advantage just before the interval.

Pyke played a ball to Pennington who sent in a dangerous cross into the middle of the box. Leahy met the cross but his header sailed over the bar.

The Brewers were the liveliest after the restart as Smith drove into the box and followed it up with a shot, but Marosi was quick to get down and parry the ball away.

But Marosi’s parry fell to the feet of Hamer, who tried to get his shot off but Marosi did excellently to rectify his mishap and push it out for a corner.

A few minutes later, Marosi made another magnificent save as Deji Oshilaja had a shot from close range.

Oshilaja met a ball that was sent into the box and looked to find the bottom corner to no avail, but Marosi was quick to react and push the ball behind for another corner.

The game then paused for six minutes as Shrewsbury's Slovakian shot-stopper received treatment for serious-looking injury. Thankfully, after brief treatment with the magic sponge, Marosi was back to his feet and able to carry on.

Burton grabbed the equaliser through Adeboyejo in the 58th minute as he converted into the bottom corner from close range.

Following the equaliser, Cotterill went for a change of system and personnel as Elliott Bennett and Ryan Bowman replaced Pyke and Nurse.

The Shrews moved to a 3-4-1-2 as Shipley moved to left-wing-back, the incoming Bennett went on the right, and Pennington joined Moore and Dunkley in the middle of defence.

Winchester and Leahy remained in the midfield as the deeper duo whilst Bayliss took up the number 10 role. Bowman joined Saydee up front.

Following the change of system, Shrewsbury found the back of the net in the 67th minute as substitute Bowman tapped in from very close range.

The move began with Bayliss in the centre of the pitch, who found Shipley out wide with the outside of his boot.

The ex-Coventry man then delivered a pinpoint cross to the back post, which was met by Bowman for him to finish the finely executed move.

Shrewsbury were sailing as the clock ticked over the 90-minute mark, however, the ship suddenly looked more unsteady when the fourth official indicated there was to be a minimum of 13 added minutes.

During this extra period, Burton had multiple corners and put pressure on their hosts. However, they couldn't turn home an equaliser and Shrewsbury collected all three points.

Tickets for our Sky Bet League One game with Burton Albion are on sale now.

Ticket Office opening hours are 10am – 5pm Monday and Thursday, 10am -2.30pm Tuesday and Wednesday. It is open from 10am to 5pm on a Friday before a home matchday and 10am – kick-off on a matchday Saturday. 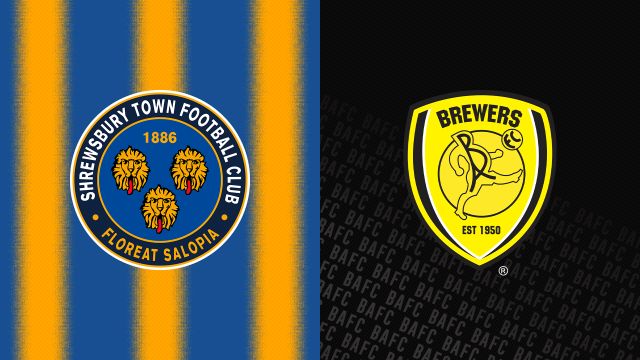 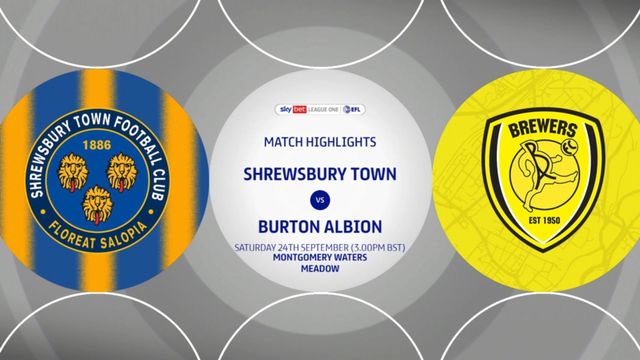 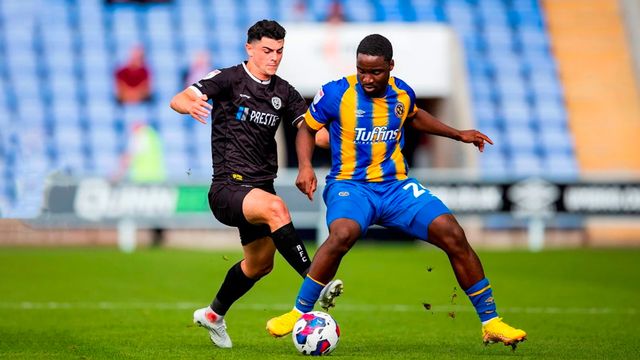