Ten-man Shrewsbury Town fell to a narrow 1-0 defeat at the hands of Accrington Stanley at the Montgomery Waters Meadow this afternoon.

In the 77th minute, Accrington opened the scoring as Tommy Leigh headed it home in front of the traveling crowd.

Shrewsbury's best chance of the game came from a Salop quick passing move in the 37th minute as the ball was delivered to Julien Dacosta, who then worked his magic and sent a low hard-driven cross to the edge of the Accrington box. Tom Bayliss was there to receive the ball and then made a through pass to Ryan Bowman who was inside the box, and he was the one to release the shot, however, he could only send it just wide of the far post.

In the initial stages of the first half, Dacosta picked up the ball from an Accrington defender and drove forward down the right wing before crossing. Bayliss was in the box to get on the end of the cross however could only send it wide.

Shaun Whalley drove down the right-hand side for Accrington in the opening stages before he dove a low cross towards the back post, however, Marko Marosi was quick to react at his near post and got down to parry it to the Shrewsbury defence to clear.

Taylor Moore was the architect of a Shrewsbury chance on the half-hour mark as he played a pinpoint 60-yard pass to Dacosta. The Frenchman received the ball and drove before floating a cross in from the right and sent it into the middle of the box where Bowman leaped up and contested for the ball however, Lukas Jensen did well and got a hand to it and sent it for a corner.

Just before half-time Salop had a corner, and Bayliss played the short pass to Jordan Shipley who then sent the ball low and hard into the box with a lot of pace but no one could get the crucial touch to send it into the back of the net.

Just after half-time, Dacosta and Bayliss played a slick one-two with each other as they received the ball from George Nurse in the Accrington half, once Dacosta received the ball back he took it to the by-line and sent the ball goalward however, Jensen made a fabulous save to stop Salop from taking the lead.

One minute after, Dacosta was once again in the thick of the action as he received the ball down the right-hand side again and he cut inside with the ball and entered the Accrington box. He then sent a curing shot towards the far corner however, again, Jensen pulled off another magic save to prevent Salop from leading.

The game was put on its head in the 57th minute when Tom Flanagan received two yellow cards in a matter of seconds. After the game, the referee's justification for the decision was that Flanagan deserved one for pushing a player to the ground and then one for further retaliation.

It was at this point that Accrington took the lead. The move began down the right-hand side as Mitch Clark crossed from deep in the Shrewsbury half and Accrington half-time substitute Leigh leaped highest in the Salop box and got on the end of the cross and sent the ball into the back of the net for what proved to be the decisive goal.

Shrewsbury had a late chance to draw level from a corner lofted into the middle of the Accrington box. Chey Dunkley was in the box and leaped high to be first to it however he could aim it into the arms of Jensen.

In the 57th minute Tom Flanagan was sent off for Shrewsbury after receiving two yellow cards.

Shaun Whalley picked up a yellow card in the 68th minute 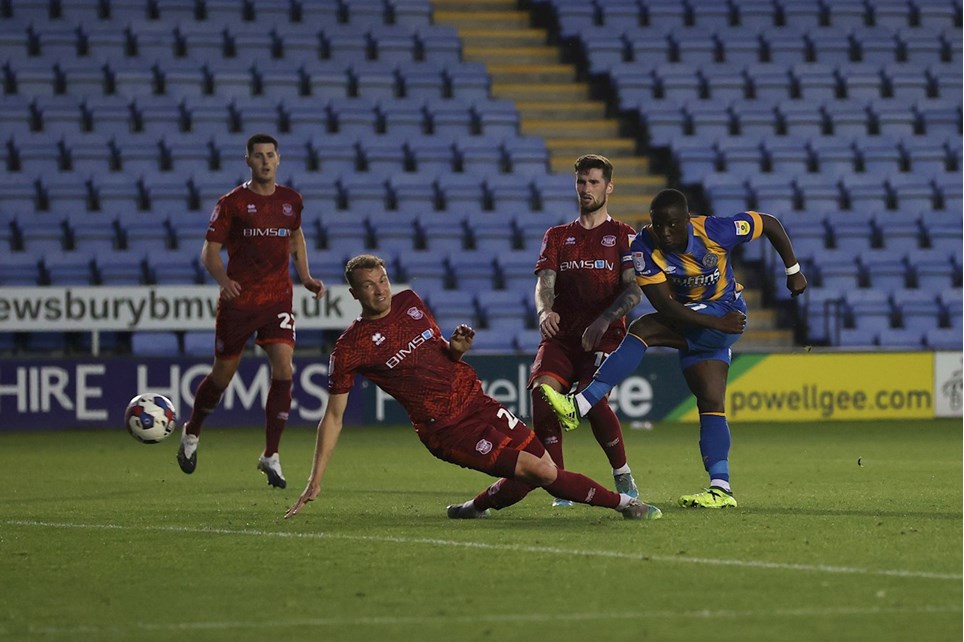 
Steve Cotterill’s Shrewsbury Town achieved their first win of the season at Montgomery Waters Meadow tonight as they won 3-2 against Carlisle United in the League Cup. 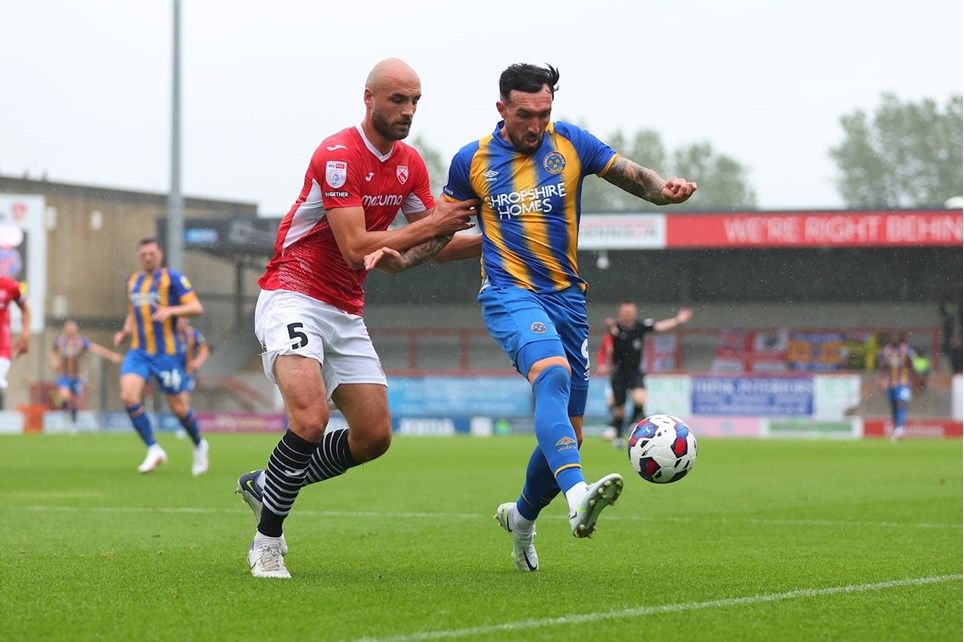 
Shrewsbury Town started their Sky Bet League One campaign off with a 0-0 draw away from home against Morecambe FC at the Mazuma Stadium on Saturday afternoon. 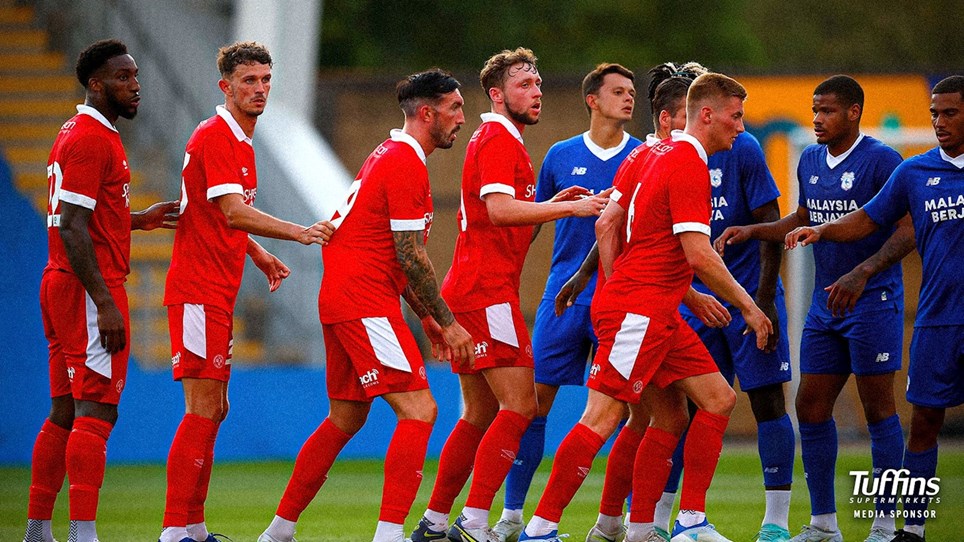 
Shrewsbury Town rounded off pre-season with a draw against Cardiff City at Montgomery Waters Meadow on Tuesday night. 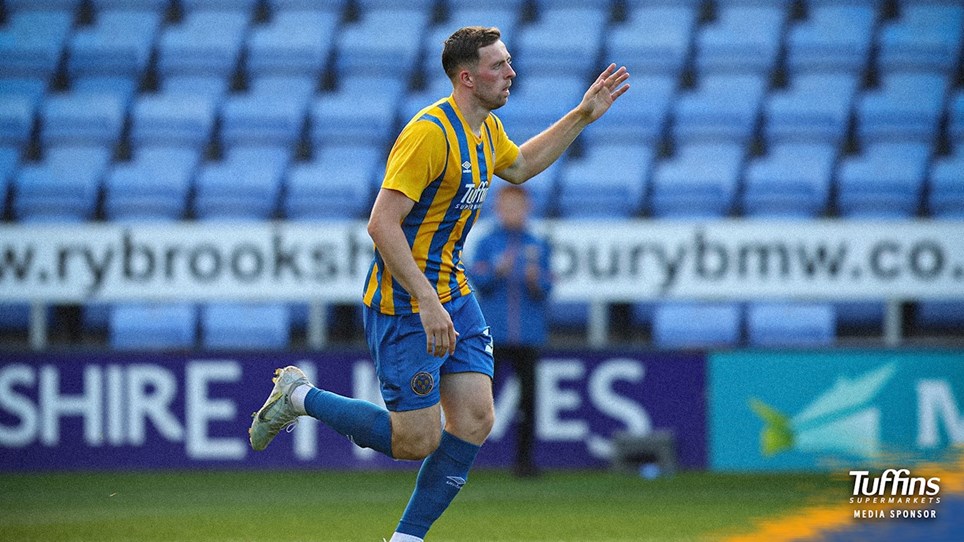 
Shrewsbury's pre-season campaign continued with a loss to Championship side Burnley.