Bob Davies sat down with Andrew Tretton back in August to discuss his playing career and role as Shrewsbury Town's Commercial Manager.

A glance at a couple of websites that mention Andrew Tretton will very quickly lead you to the conclusion that not only was he a very popular Shrewsbury Town player, but he has now successfully made the transition to become a talented businessman.

Andrew has been the club’s commercial manager since the start of the 2017/18 season at the Montgomery Waters Meadow and his role is to oversee all aspects of the club sponsorship, including the kit, the executive boxes, membership of the Sovereign club, and the players’ sponsors as listed in the programme.

“It is a wide number of things which fall into my remit,” he said. “People don’t realise that the close season is our busiest time. Some at the club ask what we are going to do for eight weeks at the end of the season but it is hard work because you have to put in place the infrastructure to negotiate deals.

“We are extremely lucky with our sponsors as they have stayed with us throughout the pandemic at a time when we were not able to give them what they were entitled to, such as match tickets and hospitality. The same applies to the season ticket holders. It is incredible really.

“Fans go up and down, depending on the way results go, and it shows the love the people of Shrewsbury and Shropshire have for the football club.”

Andrew said he had been fortunate to learn so much from people he had worked with over the years, such as Alan Stephens – who was commercial manager when he returned to the club at the end of his playing days – and Mike Thomas.

But let’s return to those references on the web as they clearly indicate what a range of skills he has developed in his role. They include event management, football, sports, new business development, sales, sponsorship, social media marketing, B2B, customer service, retail, business planning, coaching, account managing, and advertising.

And to emphasise his popularity, one contributor to LinkedIn declared: “His dedication is amazing, and he will always go that extra mile to satisfy. I have found that nothing is too much trouble. His charity work as well doesn’t go unnoticed.”

Andrew is quick to point out how content he is in his job after a playing career that took him from his hometown club, Derby, to Shrewsbury, Hereford, and Accrington Stanley before he was forced to quit because of a persistent knee injury.

He made 113 appearances for Shrewsbury and scored six goals before being released at the end of the 2002 season.

“When that happens you are devastated at the time,” he said, “but I was signed by Graham Turner and played for him at Hereford.” He made 86 appearances for the Edgar Street club before moving on to Accrington, where he managed only six games before deciding to call it a day due to persistent problems with his knee.

Andrew was born in Derby and spent a few years with the club before being released because of a series of injuries and the fact that the Rams moved into the Premier League.

Understandably, he was upset at the time but, without a club, he kept himself fit before Alan Durban who, in 1997, was chief scout for Derby and recommended Andrew to Town’s then-manager Jake King.

A defender, he had had trials at various clubs which had come to nothing and when he travelled to Shrewsbury on a Thursday to see Jake, he thought the result would be the same. But, much to his surprise, Jake asked him if he could play on the Saturday.

“I had played well in a trial and thought it would be a reserve game but Jake said they had a number of suspensions and I went straight into the first team. In a way, it was good because I didn’t have any time to think about it. 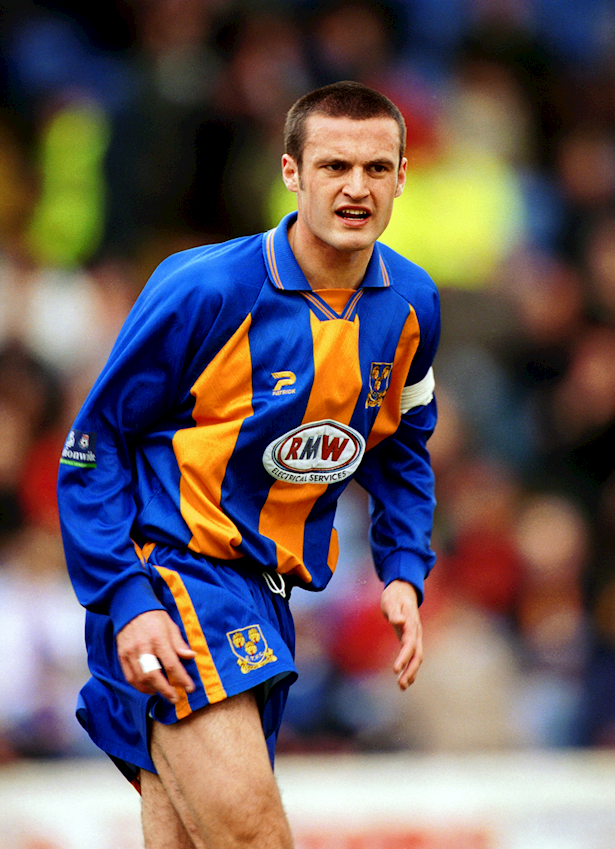 “I moved to Shrewsbury and have never left the area. We have three children and me and my family love the town,” he said.

Andrew added that things went wrong for Jake when the team went on a poor run and Chic Bates took over as manager for a couple of games. “He made me captain, which was brilliant for me and I will always be grateful for that,” he said.

He recalled, too, when Kevin Ratcliffe became the boss playing in the “great escape” at Exeter, where Town’s victory meant they avoided relegation.

“The communication about the other scores was not very good. I remember my dad was in the crowd and when the ball went out of play, I was looking for him to tell me how Chester were getting on!”

Looking back at his career, Andrew said he would always be thankful for the opportunity to play football. “I was very proud,” he added, “because not too many people get to play league football.

“We had a close-knit bunch of players at Shrewsbury and we got on well with the fans, who were always fair with us.”