The club is delighted to report that we were able to donate hundreds of football strips to an aid mission to The Gambia. The mission was organised by Emergency Services Aid Charity (ESAC) and attended by a member of the club's staff.

In this article, you will be introduced to the story of Momo, a teenage boy whose life hangs in the balance and who is in desperate need of help. If you are able and willing, please donate via this Just Giving page.

Pauline Newton works at Shrewsbury Town as one of our heads of safeguarding and nominated herself for the ambitious trip almost two years ago. Following a 30-year career as a police officer, Pauline took up her new role at Shrewsbury Town last Spring and works closely with our academy as well as overseeing the majority of safeguarding duties required at a professional football club. 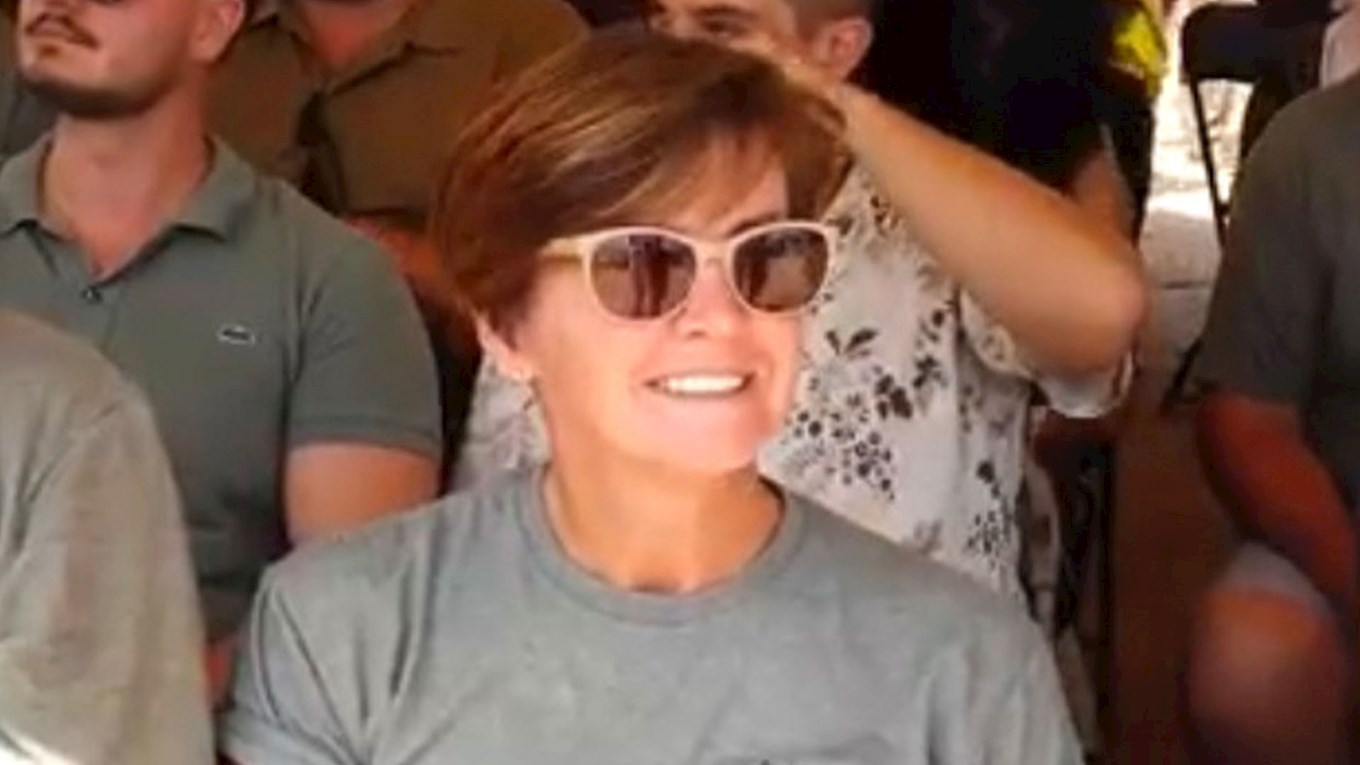 Pauline Newton, a head of safeguarding at Shrewsbury Town.

'Thankfully, Shrewsbury allowed me to honour my commitment to Op Zephyr,' Pauline began. 'Initially the intention had been to set off in 2021 but Covid had other ideas.

'Delays caused by the pandemic provided the opportunity to form ESAC; aimed at bringing together the various services from across UK & Europe to source and deliver equipment and training to where it is needed across the world. Saving lives and assisting those in need by providing essential lifesaving equipment to low-income countries and those who have suffered disaster.

'ESAC’s maiden mission addressed the high infant and maternal mortality rates in rural communities of The Gambia together with the unnecessary loss of life/limb following complications from untreated minor injuries; both due in part to the lack of suitable transport and location of medical facilities. We also delivered 18 emergency vehicles which we drove there for them.' 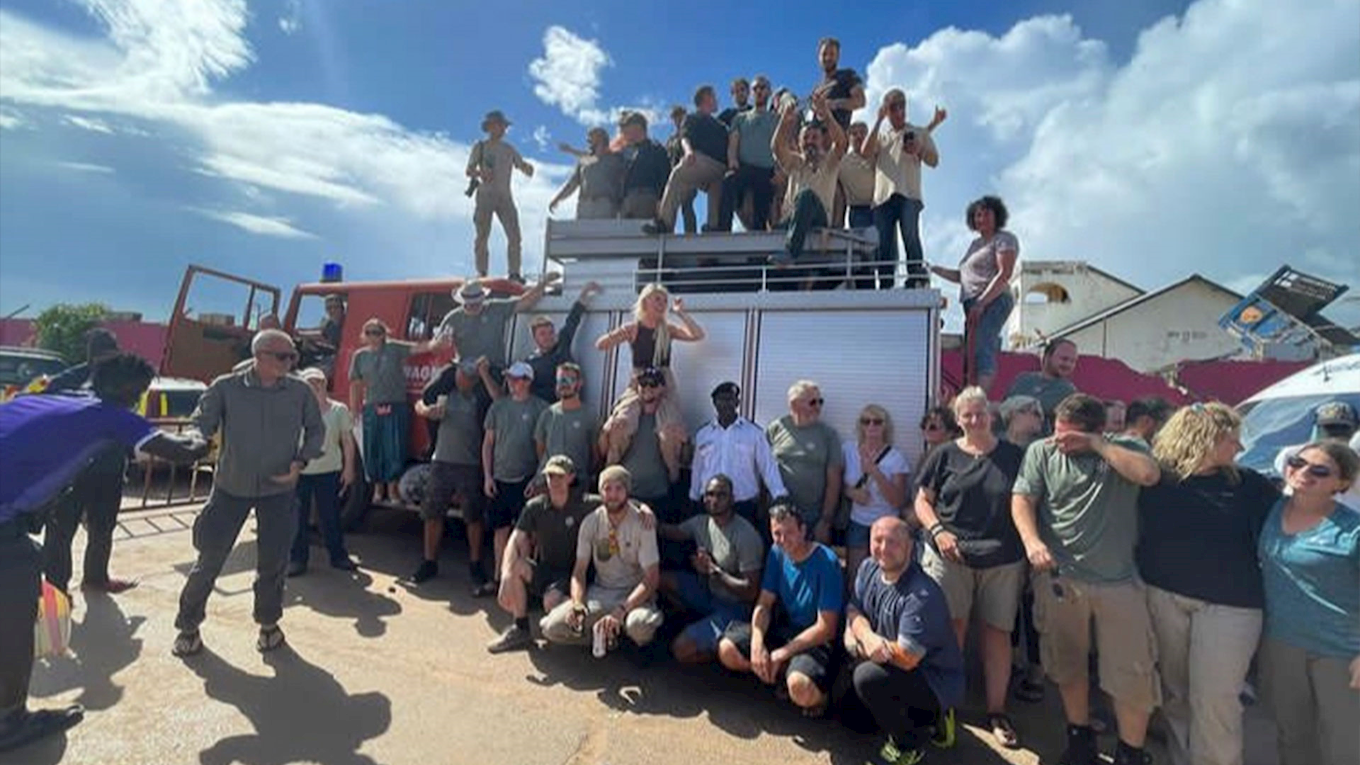 Every volunteer on the ESAC Op Zephyr mission to The Gambia.

Pauline requested a donation of some description from the club and said that what she was able to pass on to the communities she visited throughout Africa was incredibly well received.

'Sib, the club shop manager, very generously passed on to me all the redundant stock of football strips from previous seasons that were no longer required – there were hundreds and hundreds of items from baby sizes to 5xl – and all were very well received. The children in particular, throughout all the African countries we passed through, often wore threadbare clothing and so various items were gifted along the way to yelps of delight and before the majority was distributed at our destination.

'ESAC and the recipients are so very grateful to the club for their generosity - Aston Villa seemed to be the most popular UK shirt worn in West Africa as we passed through, but I feel Shrewsbury Town FC may be about to take over and I hope that on my next trip to The Gambia there will be a sea of blue and amber!' 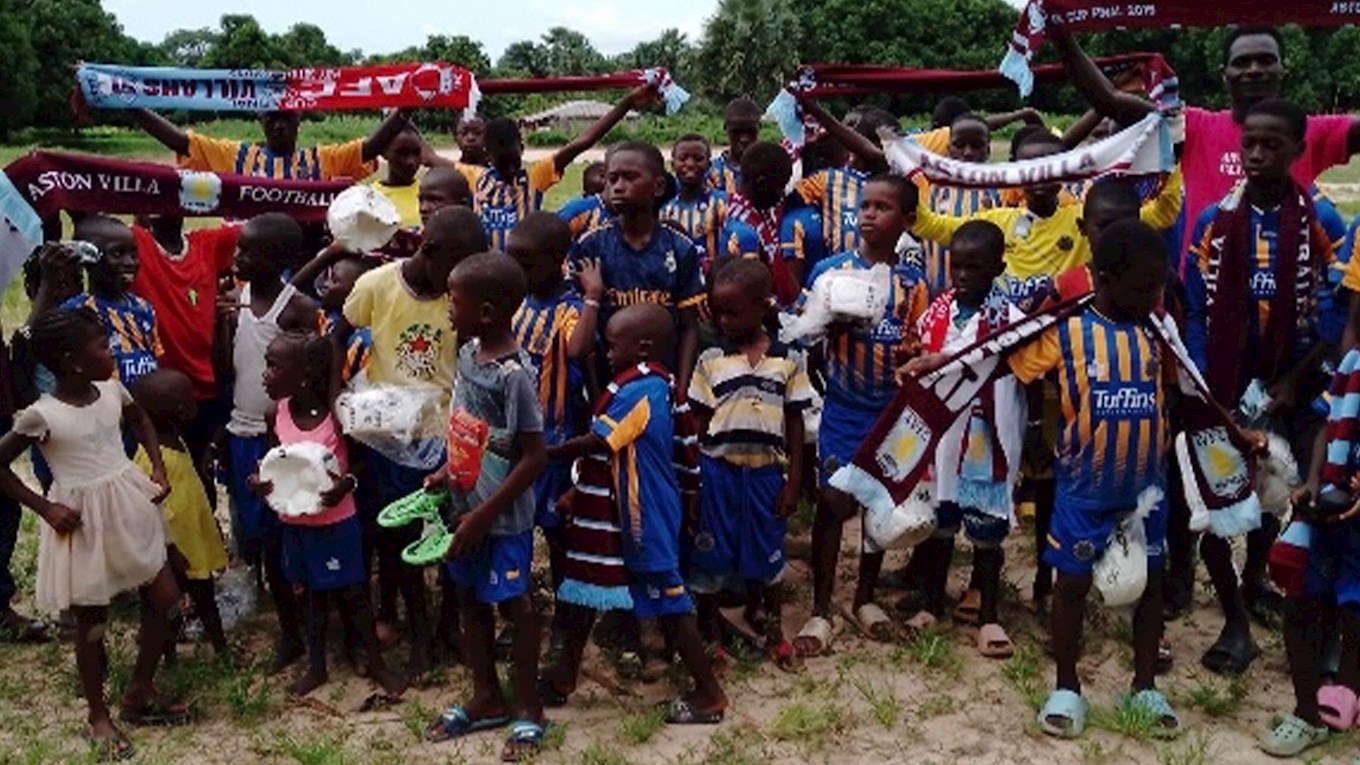 Children in Africa with Shrewsbury Town shirts and shorts.

There was one particular moment that stuck with Pauline. She spoke of a teenage boy who had been tragically paralysed in an accident who she had been able to help go from a tin shack to specialist care for his life-threatening injuries.

'Momodou Salieu Jallow (Momo) turned 17 in October. He is an orphan with one older brother who has to work all day every day to provide for them both. In March 2022, his neck was fractured during a friendly game of leapfrog with his school friends; he was immediately unable to move from the shoulders down. He underwent an emergency operation but soon developed large pressure sores which greatly increased his susceptibility to infection and risk of death.'

When Momo was discharged from hospital, he was once again looked after by his older brother and Buba (a friendly local). The brothers lived in a 3m x 3m tin shack that was just high enough for Pauline to stand up in - an all too common example of the living conditions seen across Africa and The Gambia. With no professional help, Momo's condition worsened and Buba obtained emergency intervention from Andy, an advisor to the Mayor's office. It was through Andy that Pauline met Momo.

'Momo was laid across his bed. He was no bigger than a 10-year-old boy and whilst desperately unwell, he was smiling. Being unable to speak Mandinka (a local language), and his English being limited, we chatted with the assistance of Buba, and whilst I massaged his tiny arms and hands we laughed. Despite everything, he was able to laugh.

'I left him with Lenny the Lion, the character mascot who had travelled on my dashboard on the miles between Shrewsbury and Banjul; I had intended to take him back to my office but his new home was with the brave young man I now call Momo. I also handed over my Op Zephyr medal – Momo’s triumph over the odds that had been stacked against him was far more deserving than my efforts could ever be.' 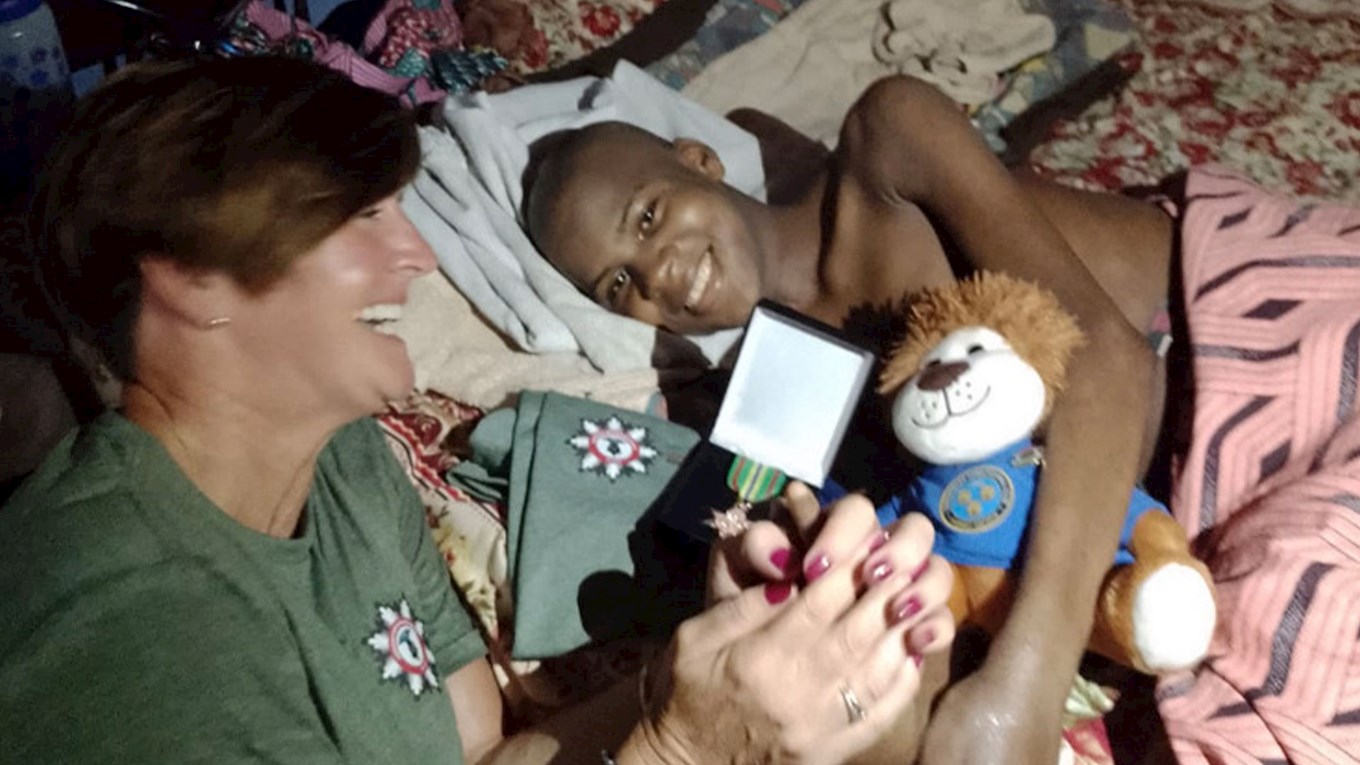 Pauline and Momo. Momo is holding Lenny the Lion and the Op Zephyr medal.

Pauline continued: 'Having some knowledge of pressure sores/risk and signs of infection etc I raised concerns with Andy who shared them.

'We secured the services of a local nurse and doctor and with pledged funding, Momo was taken to hospital for treatment. Over the course of a few days, his condition became stable and he was moved to another hospital more able to provide for him.

'Nurse Connie was introduced to Momo. She volunteered to support him alongside Buba and in addition to her other work. Their care has been exemplary and Momo’s wounds are slowly healing.

'However, he still needs more help. I set up a Just Giving page, managed by ESAC, and they have already been able to transfer almost £2000 of donations. Necessary equipment is expensive but without hesitation, Connaught Care and Accora gifted an electric air flow mattress, a neuro wheelchair and specialist medical dressings all of which have already been sent to The Gambia for Momo.

'Momo was improving leaps and bounds but symptoms of a fever raised concerns and he was transferred to a specialist hospital on October 27th, 2022. His ongoing care will cost approximately £500 a month for life after his sores heal. His future is very much in the balance, but with his determined spirit hope remains,' said Pauline.