Marcus Braddock looks ahead to Saturday's trip to Bristol R

This weekend, Shrewsbury Town make the relatively short journey to Bristol to take on Rovers in Skybet League One. The Gas have had a difficult season so far and consequently sit just above us in 20th position. The main problem for Rovers seems to be their home form, just three wins at home in League One all season. Fortunately their away form has been good enough to keep them in touch with the other teams at the bottom and an upsurge in their recent form had pushed them out of the relegation positions. The upsurge in form seems to have coincided with Graham Coughlan's promotion to manager. The ex-Town defender is in his first managerial position having taken up coaching whilst playing at Montgomery Waters Meadow. So far his team have won six times from twelve games and will be hoping that a good result in this weekends game can kick start their home form.

Four at home and six away.

Town have pretty much everyone available apart from Lenell John Lewis and Romaine Vincalot who is injured and Stefan Payne who is unavailable to play against his permanent club.

Graham Coughlan could name the same team that won at Southend last week.

In a way, Bristol Rovers and Shrewsbury Town are polar opposites with Rovers poor home record the main reason for their lowly league position and our away form causing us similar woes. If we had their away record we'd be comfortable in the top ten and if they had our home record they'd be right up there with us.  But they don’t and we don’t and we both have a need for points and this weekend.

Rovers’ manager Graham Coughlan is playing against one of his old clubs for a second weekend in a row. They beat Southend last weekend and as much as I like Coughlan from his time with us, I really hope he doesn't make it two out of two!

Town’s afternoon in Bristol came to an end with both teams taking home a point.

Team News: Sam Ricketts handed a start and debut to Town new boy Ro-Shaun Williams as the defender replaced Luke Waterfall in the Town back line.

The first opening minutes went by with both teams feeling out the opposition. Rovers looked strong on the wings, just as Town did with Shaun Whalley and Scott Golbourne looking dangerous.

Ollie Norburn and Anthony Grant were getting stuck in around the middle of the park and were continually looking to frustrate the home sides middle unit at any given chance.

The home side nearly had the ball in the back of the net just before the 15-minute mark. Liam Sercombe received a stroke of luck and found himself in the box one-on-one with Steve Arnold, but the keeper made himself big and did well to parry the ball away.

Joe Partington was given a yellow card midway into the half. The defender mistimed his tackle on Josh Laurent on the left flank.

Abu Ogogo and Norburn were both booked shortly after for a coming together.

With 15 minutes to go, Josh Laurent had chance to fire a shot off at goal from range. The midfielder managed to pick the ball up on the edge of the box but couldn’t guide his effort on target.

Some great play from Laurent and Shaun Whalley opened up the game for Town and Sam Ricketts’ men managed to take the lead in the 35th minute. A neat one-two pass from the pair saw Town’s number seven inside the box where he calmly slotted the ball past Jack Bonham.

The home side had a chance to break even with the last kick of the half with a free kick but the Gas couldn’t get a head on the ball.

The half came to an end with Town going into the break with a one-goal advantage.

Just 10 minutes into the second-half former Town winger Alex Rodman managed to pull the Gas back on level terms. Rodman drove well into the box to meet a cross that he headed into the top corner.

The home side came out for the second-half and took the game to Town. The only thing denying the Gas another goal was a great diving save from Arnold after Tareiq Holmes-Dennis fired a strong curling effort towards goal.

Second-half sub Greg Docherty came inches away from giving Town another goal. Whalley slipped the ball into the midfielder but Docherty narrowly missed the target with his driven effort.

Another great save from Arnold denied the Gas a goal. Sercombe found himself with a yard of space in the box but Arnold’s strong hands matched his powerful close range effort.

Scott Golbourne was given a yellow card in the 69th minute for a strong challenge on his left flank.

The game was starting to close up, as both teams weren’t willing to take huge risks. Despite the compact midfields, Laurent was still pushing forward and letting off effort at goal.

Dave Edwards was given a straight red card in the 86th minute for a challenge in the middle of the park.

The game came to an end with both teams taking home a point after an intense competitive match.

Tickets are now on sale for our Sky Bet League One trip to the Memorial Stadium.

We have been allocated 500 tickets for the game, split between 200 South Stand seated tickets and 300 terraced tickets.

Wheelchair Bays - Tickets are priced at Adults £11, 65-16-12 £9, Under 16 £5, Carer is free of charge. There are 6 visiting wheelchair spaces situated in front of the Away South Stand. (Please note this is an uncovered area).

Town fans can pay on the day and there is no increase in price.  Sales and collections are from the booth by the away end. 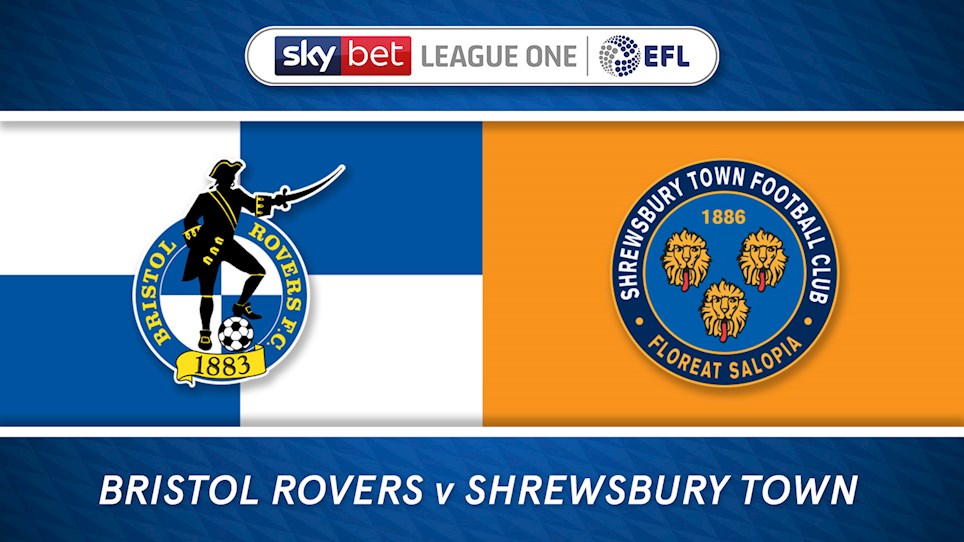